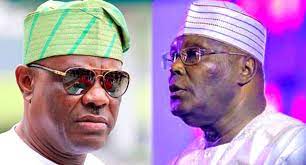 Loyalists of Governor Nyesom Wike of Rivers State have pulled out of the campaign council of Atiku Abubakar, Presidential Candidate of the Peoples Democratic Party (PDP).

This comes amid the pressure on the party’s National Chairman, Senator Iyorchia Ayu, to step down.

Amid the pressure on Ayu to step down, Walid Jibrin had relinquished his role as the Board of Trustees (BoT) chairman of the opposition party, but Wike’s camp rejected this.

Last week when Atiku visited Oyo to meet with party stakeholders, Governor Seyi Makinde, a strong ally of Wike, reiterated the call for Ayu to step down.

This had divided stakeholders in the South West as the majority queued behind the PDP National Chairman, who is currently out of the country.

Rising from a meeting in Port Harcourt on Wednesday morning, Wike’s loyalists vowed not to partake in Atiku’s campaign activities until Ayu resigns.

Chief Olabode George, who walked out of the meeting where Jibrin’s resignation was announced, read the communique on behalf of the group.

“The published presidential campaign council list translates to putting the cart before the horse, the pertinent issue remains the Ayu leadership. We, therefore, resolve that senator Iyorchia Ayu resigns as the national chairman for an acting chairman of southern Nigeria extraction. We resolved not to participate in the campaign council in whatever capacity until the resignation of Dr Iyorchia Ayu,” he said.

Among those who attended the meeting which was held at Wike’s Port Harcourt residence were former Governors Olusegun Mimiko, Ibrahim Dankwambo, Jonah Jang, Ayo Fayose and Donald Duke.

Many of those who attended the meeting are members of the over 300-man campaign team of the opposition party’s presidential candidate.

On Monday, Governor Samuel Ortom of Benue State called on the national leadership of the PDP to address the grievances against Wike, saying dismissing him would portend danger for the party in the 2023 general elections.

Campaigns for the 2023 election will kick off exactly a week from now.