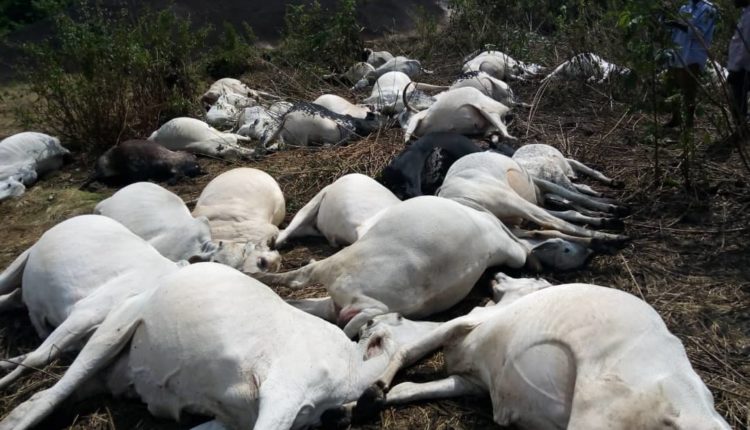 Tension has heightened in Umueri community in Anambra East Local Government Area of Anambra State, following the killing of 13 cows belonging to cattle breeders in the area

One of the suspects has been arrested and taken to the Divisional Police Office, Otuocha.

Chairman of Miyetti Allah Cattle Breeders Association of Nigeria MACBAN, Alhaji Gidado Sidikki, has called his members not to retaliate irrespective of any form of provocation .

When contacted yesterday, the state police spokesman, Haruna Mohammed, promised to get back to the reporter.

When he responded, he failed to talk on the arrest of any suspect, but rather sent a text to this reporter, saying the case was under investigation

The traditional ruler of Umueri, Igwe Ben Emeka, told The Nation yesterday that his community had not had any clash with the herders.

Rather, he said their farmers had been complaining of the herders’ cows invading and destroying their farm produce.

The monarch said, “We are calling on the state government to limit their movements to areas without farmlands to avoid clash without people.”

Sidikki told The Nation yesterday that cows belonging to his members were killed at the weekend.

He said the people of Umueri and Nando, both in Anambra East, had warned the herders not to come to their communities.

Sidikki said there would not be any form of reprisal attack because of the relationship existing between Miyetti Allah and the state governments not only in Anambra, but the entire Southeast region

“Despite all the problems being created by some people, our relationship with the government will not be soiled by anyone and we are handling this issue in a very peaceful manner,” he said.