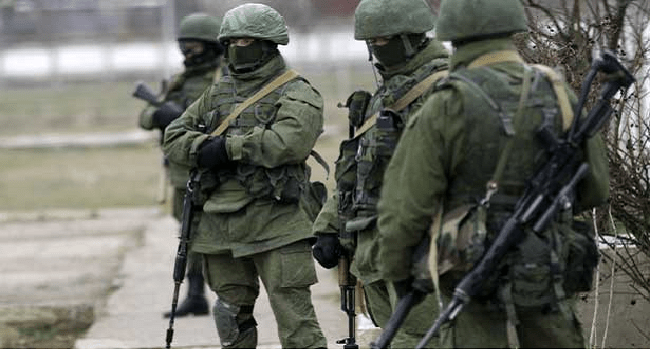 The Ukrainian Department of Defense has said that Russian troops in Ukraine have suffered 800 casualties, a figure Moscow disputes.

Two days in, the Russian offensive appeared to be stymied by stiffer-than-expected resistance from highly motivated Ukrainian armed forces.

Despite an overwhelming advantage in manpower and equipment, the Russian advance lost some of its momenta Friday and the quick victory Russian President Vladimir Putin was counting on is no longer assured, a senior United States defence official told NBC News.

“We do assess that there is greater resistance by the Ukrainians than the Russians expected,” the official said. “They are fighting for their country.”

While Russian forces are threatening the capital, Kyiv, and other major cities like Kharkiv and small-but-strategic cities like Rivne, none have been taken so far and the Ukrainian air defences remain largely intact despite being targeted by relentless missile attacks, the official said.

Western Ukraine, which borders NATO member Poland and where the U.S. and other countries are maintaining a diplomatic presence in the city of Lviv, “remains largely undisturbed,” the official said.

And while a Russian amphibious assault involving thousands of soldiers was underway west of the city of Mariupol in the Sea of Azov, the official said the assumption is that those forces are bound for the Donbas region, which is a pro-Russian area where Moscow-backed separatists have been fighting the Ukrainian forces for months.

“Contrary to great Russian claims, and indeed President Putin’s sort of vision that somehow the Ukrainians would be liberated and would be flocking to his cause, he’s got that completely wrong, and the Russian army has failed to deliver, on Day One, its main objective,” British Defense Secretary Ben Wallace said.

Wallace’s assessment came as the outskirts of Kyiv were being pounded by Russian missile strikes and machine guns were being handed out to civilians preparing to defend their city from the invaders.

Ukrainian President Volodymyr Zelenskyy, who has shed his tailored suits and is now dressed for battle in hunting gear, has refused to leave Kyiv and has been pleading for Western governments to take tougher measures against Moscow.

“I think they are going to fight,” James Stavridis, a retired Navy admiral and former top NATO commander, said of the Ukrainians on NBC’s “TODAY.” “The government in Kyiv has handed out 18,000 rifles to the populous. They are restricting all men aged 18 to 60 from leaving the country. Clearly Zelenskyy, he’s out of his suit. He’s wearing his hunting gear. This is going to be a tough fight for the Russians.”

“It’s definitely our view that the Russians intend to invade the whole of Ukraine,” Wallace told Britain’s Sky News, adding that Moscow is already “behind its hoped-for timetable” and has lost more than 450 personnel.

The Ukrainian Department of Defense claims the Russians have suffered 800 casualties, a figure Moscow disputes.

NBC News has not confirmed the numbers of any injuries or deaths on either side.

Putin insisted they were winning the war and continued to cast the biggest European invasion since World War II as a defensive measure.

“Our soldiers are successfully fulfilling the task of protecting our people and our Fatherland,” he told Russian media.

Igor Konashenkov, the chief spokesman for the Russian Defense Ministry, insisted Russian forces were racking up victories across Ukraine, but especially in the pro-Russian Donetsk and Luhansk enclaves in the eastern corners of the country.

Konachenkov said the Ukrainian army has not figured in the fighting over there and “only battalions of Ukrainian Nazis offer fierce resistance.”

The Russians have, for months, been peddling bogus accusations of Nazi elements within Ukraine to justify an attack on the country.

Both Putin and Konachenkov also attempted again to push the false claim that Zelenskyy, Ukraine’s embattled president, who is Jewish and lost three family members in the Holocaust, was using Ukrainians as “human shields.”

“I am addressing the Ukrainian citizens,” Konachenkov said. “Your nationalist leadership uses the same methods the terrorists do. They wish to use you as a human shield.”

Konachenkov also insisted that the “Russian armed forces will not carry out any strikes against the residential areas of the Ukrainian capital.”

But already footage has emerged of residential apartment buildings in Kyiv that had been hit by what appeared to be missile strikes. And thousands of residents have already been hiding in shelters and in subway stations, their sleep made impossible by fear and the wailing of warning sirens.

“Currently, Kyiv is being under attack from the north and south,” Veronika Melkozerova, executive editor of The New Voice of Ukraine, said on MSNBC. “Every Ukrainian is going to fight, and it is not going to be an easy ride for Russia.”

Russia Has Money To Service Its $150B Debt, But Can’t Access It – IMF