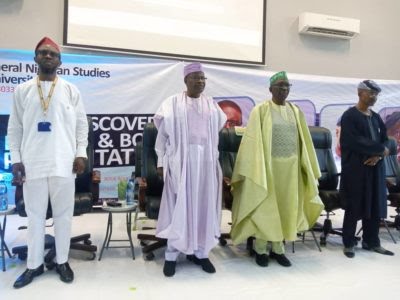 A renowned journalist and former Senior Special Assistant on G.77 to former President Olusegun Obasanjo, Dr Haroun Adamu, has urged politicians in the country to, at all cost, avoid anything that could again throw Nigeria into another civil war.

He also called on government at all levels to reduce to the barest minimum (if not totally eradicate) the huge youth unemployment and out-of-school children in the country.

He was the chairman of the event with many high profile persons including the former Speaker of Ondo State House of Assembly, Dr Bakita Bello; immediate past Chairman of Governing Council of LASU, Prof Adebayo Ninalowo; LASU Vice-chancellor, Prof Olanrewaju Fagbogun; Prof Adeleke Fakoya, who was a book reviewer; Director of CGNS, Prof Biodun Akinpelu; Prof Fola Fosudo, a lecturer and renowned artist; Prof Samuel Odewunmi who served as book presenter; among others in attendance.

Speaking on “Can Nigeria survive another century as a corporate entity? A compendium,” which is the title of the new book, he said, even though there are lots of challenges capable of dividing Nigeria, the country would remain indivisible.

According to him, Nigeria cannot afford to have a repeat of another civil war.

“Though we survived the bloody 30-month fratricidal civil war in the 60s, we should also, by all means, do away with anything that could lead to another war,” he further advised.

“To achieve this,” he said, “Our politicians, in particular, must do the right things and be patriotic by putting the nation’s interest above their personal gains. They must also deliberately take steps towards national healing, integration, inclusiveness and meaningful development instead of actions that are capable of dividing us.”

While noting that so many youth in the country are frustrated already due to high level of poverty, he urged government to run programmes that would create wealth and prevent them from bearing arms against the state.

“The university system should also be producing enterprising graduates that would be employable and job creators rather than job seekers,” he added.

He said while he believes that Nigeria would survive beyond next century despite the huge problems confronting it as a country and as a people, including insurgency, cattle rustling, banditry, kidnapping, armed robbery and so forth, he said all these problems are poverty-induced.

In his own contribution, the guest lecturer, who is a US-based, Prof Adekunle Akinyemi identified 25 variables that would need to be addressed for Nigeria to become a prosperous country.

He said these variables were a great threat to standards of living and economic prosperity of Nigeria.

Prof Akinyemi spoke on “Nigeria’s survival and the tasks ahead of our youths.”

In his welcome address, the Vice-chancellor of LASU, Prof Olanrewaju Fagbohun, commended CGNS for putting up the compendium, saying it would greatly help not only the students but also the public.

He, however, promised that LASU would continue to live up to its tripartite mandates of quality teaching, researching and community engagements.