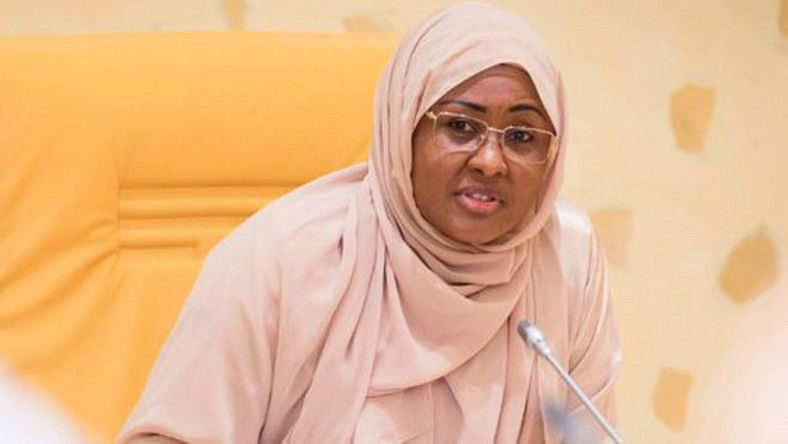 Nigeria’s First Lady Aisha Buhari asserted that she can’t be stopped from talking while speaking from London on Thursday December 5.

The First Lady who was a guest caller on TVC’s Journalists’ Hangout, made a clarification on her comment about the social media bill, insecurity and poverty in the country and lashing out at underserving governors and ministers.

Aisha Buhari stated that she has the constitutional right to freedom of expression when asked if she has been told to stop talking. “Who will stop me? Everybody is talking in the country. Everybody should talk. It is freedom of speech”,
she said.

On if she engages in pillow talk on the challenges facing the country with her husband President Buhari, the First Lady hilariously said “There is no pillow in the Villa including the other room”.

The President’s wife who stated that she knows that the challenges facing the country comes from a long-term neglect, maintained that she did not specifically blame the governors while speaking at the Nigerian Supreme Council for Islamic Affairs General Assembly and National Executive Council Meeting held at the National Mosque in Abuja on Friday December 29.

“We are all suffering from it. Whether you are an executive or ordinary citizen. We can’t go to our villages and sleep with two eyes closed. It cuts across” she said.

Also commenting on her support for the social media bill, Aisha recalled how the Minister of Communications shared a story of someone calling to confirm if Vice-President Yemi Osinbajo has resigned as claimed on social media.

Though the First Lady said everyone in the room laughed over the story, she added that it was a serious issue and she expected action to be taken to curb such fake news.

She also lashed out at some officials in her husband’s administration for taking up issues they are not concerned with.

Recounting how the Presidency reacted to report of the PDP threatening to sanction former President Goodluck Jonathan over the party’s loss to the APC in Bayelsa Governorship election, Aisha Buhari wondered where the spin doctors were when report of her husband taking up a new wife went viral.