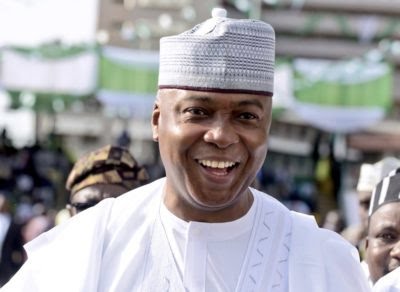 Senate President of the 8th Assembly, Senator Olubukola Abubakar Saraki, might currently be facing quite a ?turbulent time. First, it was losing his bid to return to the red chambers during the just concluded general election. Last week, the court declared interim forfeiture of his highbrow properties in Ilorin, alleging it was built with public funds when he was Governor of Kwara.

While the two-term Governor of Kwara state was still nurturing the verdict of the court injunction on his Ilorin property interim forfeiture, his creator gave him and his household a big reason to smile again.

He was blessed with a gift laced with a title money cannot buy. His eldest daughter, Olutosin Halima Saraki married to Adeniyi Olatunde Olukoya, delivered a bouncing baby girl, penutimate Friday, at a highbrow hospital located in the United Kingdom making him a proud first time grand father.

Society Rendezvous gathered that Dr Bukola and his wife Toyin, immediately jetted down to the UK the next day to see their grand child and also give moral support to the nursing mother. The name of the child is yet to be disclosed as mother and daughter, we gathered are doing good.

Aisha Buhari Says She Can’t be Stopped from Talking