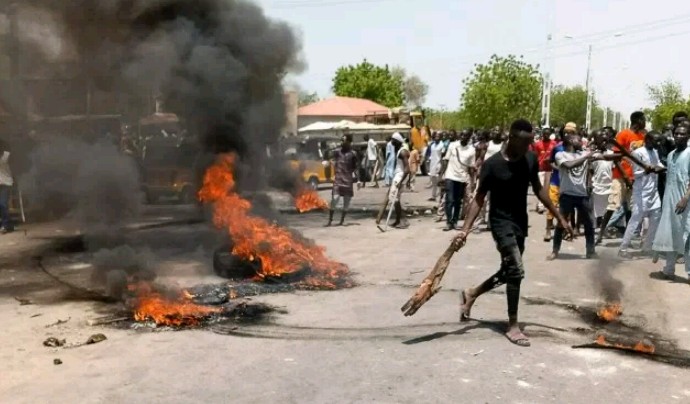 Two of the suspects whose names were given as Ifeanyi Mgbakabala and Kelechi Eke(aka Agwo) hailed from Amagwa kindred in Umuagwu village in Umuohiagu, while the other suspect’s identity could not be ascertained as of the time of filing this report.

Witnesses said the suspects, who specialized in vandalizing electricity transformers within the airport communities, were apprehended at Umuekwune kindred in Umuorisha village, attempting to vandalize the only remaining transformer in Umuohiagu.

They were said to have already vandalized eight transformers in Umuohiagu alone in the past three months, effectively throwing the community into darkness. This was even as they also vandalized the dedicated cables being installed for the new radio house for the Sam Mbakwe International Cargo Airport, Owerri.

It was gathered that the suspects had also, about four weeks ago, vandalized the transformer at the permanent base of the Nigeria Air Force at nearby Umuowa community, a development that led to detention of the two Airforce personnel on guard for three weeks.

It was further learned that following the several turns of vandalism, youth leaders in various villages had mobilised youths of the community when they learned of the new action at Umuekwune and alerted the Airforce men as they chased the suspects who ran into the surrounded area, but luck ran out on them, when the youths apprehended two of the culprits while one escaped.

Witnesses further said the suspects were dragged to the major road near the airport, where they were about being set ablaze before Airforce officers arrived the scene.

While Ifeanyi and Agwo were beaten and left near dead before being handed over to Nigeria Airforce personnel, where they gave up the ghost, the other suspect escaped to nearby Egbelu Obube community where he was reportedly set ablaze by the youths of the village.

Before they were beaten to death, the suspects, had reportedly confessed to have used black magic to cause people around their target points, including the guards at the Airforce Base, to go into deep sleep while they vandalized the transformers and cables.

The apprehension of the suspects and their confession, it as gathered, led to the release of the detained Airforce personnel Friday morning.

One of the suspects, Ifeanyi, The Nation learned, was an only son of his parents. He was said to have just returned from jail about four months ago having spent about eight months in prison for alleged armed robbery offence and his wife is reported to be heavily pregnant.

As of the time of filing this report, the state commissioner of police, Rabiu Ladodo and the command’s spokesman, Orlando Ikeoku did not answer calls put to their phones and could not respond to inquiries from our correspondent via text messages.