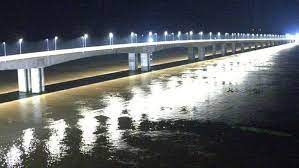 Babatunde Fashola, the minister of construction and housing has affirmed the completion of the Second Niger Bridge’s building.
Fashola made this statement on Wednesday in Abuja at the presentation of President Muhammadu Buhari’s scorecard series (2015-2023).
The second Niger Bridge has been finished. Only a 4 kilometer interchange road at the Asaba end and 2 km of a 7 km connecting road at the Onitsha end remain, according to Fashola.
“When we first took office, we increased our budget for road infrastructure and looked for additional funding sources like SUKUK, the Infrastructure Tax Credit Scheme.”
He said that his ministry had finished 12 road projects totaling roughly 896 km, given them the green light, and turned them over to various localities.
You can read more of such stories at The Cheer News
Buhari Completes 19 Roads In Tertiary Institutions &#8211; Fashola
He added that there are 83 road restoration projects being carried out by the government in federal tertiary institutions all throughout the nation, with 66 already finished and 46 already commissioned.
The Federal Government, through the Ministry of Works and Housing, decided to ensure that a new bridge is put in place to complement the existing one, which is over 50 years old. The bridge, which was conceived years ago before the Buhari administration came on board, became a reality as a result of this decision.
Babatunde Fashola had previously assured journalists that the bridge would be usable before December.
Our top objective is to make the second Niger bridge accessible to vehicles by December so that travelers can do so comfortably over the holiday season.
We are committed to opening the bridge to traffic by December, and given the volume of work being done, I can promise you that the goal will be accomplished.
You can read more of such stories at The Cheer News and Credible News