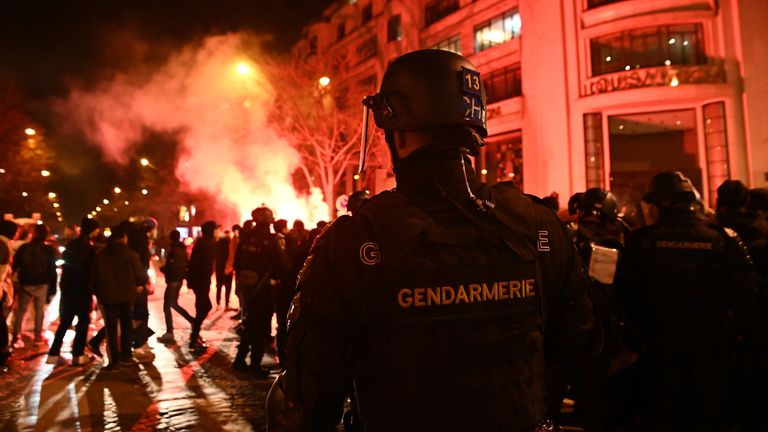 As riots broke out Friday night in the French cities of Paris, Nice, and Montpellier over Morocco’s 2-0 loss to France in the FIFA World Cup semifinal match in Qatar, a 14-year-old was slain.
According to reports, French-speaking supporters of Morocco were attempting to steal a France flag from a car being driven by a Frenchman when the Frenchman abruptly made a U-turn and drove off, hitting the teenager.
According to the Daily Mail, the youngster who suffered multiple injuries was taken to the hospital right after but later passed away.
The rioting spread to Brussels, the capital of Belgium, where the police detained some 100 people from Wednesday night until early Thursday morning.
On Wednesday night, individuals accused of upsetting the peace, causing damage to two police vehicles, and having illegal pyrotechnics were held along with football fans.
The police in France had to use tear gas to disperse mobs of Moroccan supporters who were blowing off fireworks close to the Arc de Triomphe in Paris and to do the same in the southern French city of Nice.
In France, over 170 football supporters were detained, including about 40 members of far-right organizations who were found in possession of illegal firearms.
The Atlas Lions of Morocco, who defeated Canada, Belgium, Spain, and Portugal to become the first African team to reach the World Cup, has received praise from the entire football world, but notably from African side to reach the semifinals.

Nigeria Ambassador To Spain Is Dead

If African Refuse To Take Loan From West Countries We Would Receive The Respect We Deserve, Ghana President