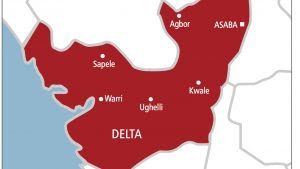 The corpse of an unidentified man with Bloodstains was found in the early hours of Friday along the Upper-Erejuwer road by Playground in Warri South Local Government Area of Delta State.

Though it was difficult to ascertain immediately what happed to the unidentified man, it was observed that bloodstains were all over the body of the deceased.

Details as to the cause of the death of the man were still sketchy as of the time of filing this report.

However, our correspondent gathered that the man died as a result of a road accident, but no one was able to get hold of the person who knocked him down.

A source said, “It was an accident that occurred last night, but the person that knocked the man down ran away.”

“The dead body of the man was dragged and dumped at Upper-Erejuwa by unknown persons on Thursday night after they knocked him down with their vehicle,” another source, who does not want his name mentioned, said.

Personnel of the Nigeria Police Force, ‘B’ Division in Warri, were seen evacuating the corpse of the man.

The Delta State Police Public Relations, Onome Onovwakpoyeya, did not respond to several calls and text messages to her.