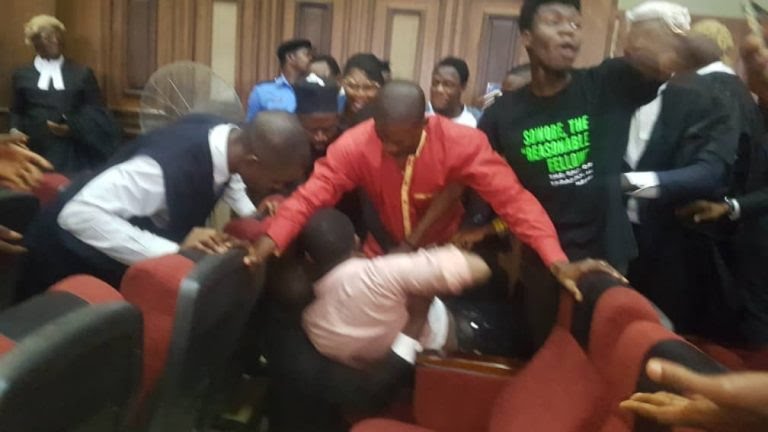 According to him, Sowore had shortly after being released from custody, addressed a group of persons, reassuring them of his continued intention to create anarchy in the country.

The statement reads in part, “It has therefore become unarguable and raises a moral question as to who, between Sowore and the Service, dislikes or disobeys the courts. In this regard, public attention may be drawn to the 25th July 2019 statement of Sowore that: “I’m not talking of protest. I’m embarking on revolution… Don’t tell me about legal implications or what a Judge will say. I don’t care.

“On December 5 when Sowore was released, he had, at the Transcorp Hilton Hotel, Abuja addressed a group of persons who, he reassured of his cause to create anarchy in the country.

“It may be recalled that the Service had on 3rd December 2019 raised the alarm about a plot to destabilize the country. It is quite remarkable that the plot has already started playing out. To ensure this objective is further achieved, some persons and groups are scurrying to seize the opportunity of the misleading court incident and the wrong narrative against the DSS to organize an insurrection in the country. They have continued to falsely curry and mobilize international sentiments and attention, through clear misrepresentation of the facts, for their selfish ends.

“For emphasis, it should be noted that Sowore is facing trial not as an activist, journalist or a politician, but for his resort to call for violence, forceful takeover of government and suspected transnational illegal activities. It is most unfortunate that Sowore, shortly after being released from custody, based on court order, resorted to acts inimical to security. To this effect, only Sowore has been re-arrested as his co-defendant, Olawale Bakare, was not picked up even when Falana had promised to deliver him to the Service that is not presently interested in him.

“Though sections of the populace have been fed with spurious narratives about these developments, Nigerians and the international community should not be gullible or even vulnerable to the machinations of groups desirous of misleading them.

“The Service is committed to the discharge of its mandate of detecting and preventing threats against the internal security of Nigeria. It supports democracy in the country and will do all that is legal to protect it. It will also ensure that efforts of anti-democratic forces are frustrated.”

Recall that last Friday, DSS operatives allegedly chased out lawyers from the courtroom and attacked journalists after which they re-arrested Sowore.

We Have Learnt Our Lesson from Buhari – Gumi