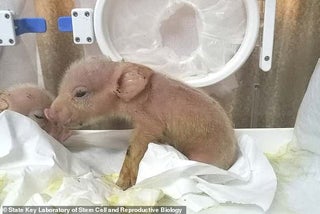 There is a high chance that the existence of cross-bred animals will be normality in the coming years as experiments are being done on a regular. To this effect, it has been reported that two chimera piglets containing monkey DNA have been born in China.

Although both died within a week and appeared to be normal, the baby animals had genetic material from cynomolgus monkeys in their heart, liver, spleen, lung, and skin, Daily Mail reports.

Scientists said the research, which required more than 4,000 embryos to get the piglets, aims to find ways of growing human organs in animals for transplantation

‘This is the first report of full-term monkey-pig chimeras’, Tang Hai at the State Key Laboratory of Stem Cell and Reproductive Biology in Beijing told New Scientist.

Five-day old piglet embryos had monkey stem cells injected into them that had been adjusted to produce a flourescent protein, allowing researchers to find out where the cells ended up.

The scientists said it was unclear why the two chimera piglets died, but as eight other normal piglets that were implanted also died, they think this is a problem with the IVF process rather than chimerism.

Despite the research, some members of the scientific community have warned against creating chimeras due to ethical concerns.

However, China shows no sign of stopping after proposing in July to create monkeys with partially human-derived brains in order to better study diseases like Alzheimer’s.

A human-pig hybrid embryo was created in January 2017, at the Salk Institute in San Diego, but died 28 days later.