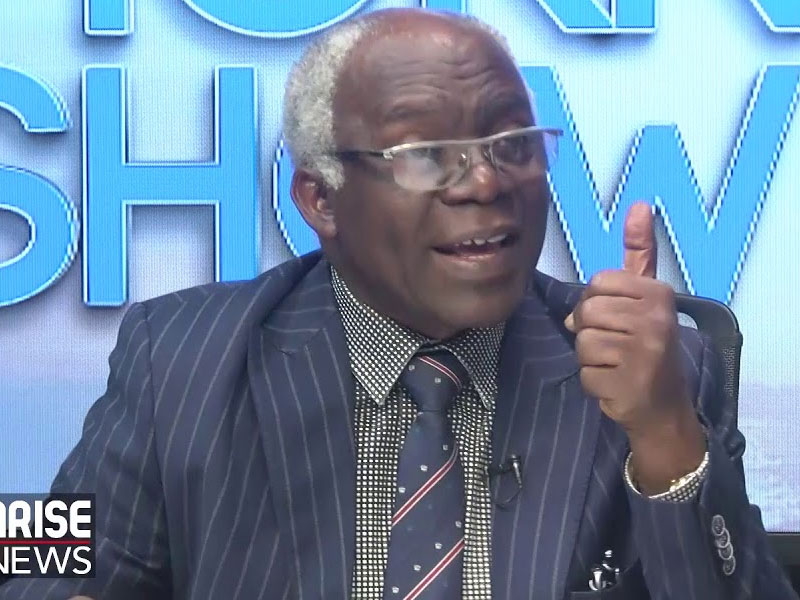 Legal luminary, Femi Falana (SAN) on Tuesday threw his weight behind the introduction of virtual proceedings by the Federal High Court to prevent a total shutdown of the country’s judiciary system.

Falana said nobody should be afraid of a reversal of all court proceedings through virtual mean.

He explained that the Supreme Court of Nigeria cannot quash virtual proceedings, adding that the National Judicial Council (NJC) headed by the Chief Justice of Nigeria (CJN), Justice Tanko Muhammad has enjoined Nigerian courts to conduct proceedings by zoom or skype.

In a statement he issued in Lagos on Tuesday noted that apart from the directive by the Federal High Court, the supreme courts of other common law countries are also hearing appeals via video conferencing.

”The NJC has also endorsed the decision of courts to resort to virtual conduct of cases in line with the current practice in all common law countries,” Falana explained.

He argued that the proceedings of a court cannot be impugned if litigants and their counsel, as well as members of the public, are allowed to participate in them via zoom or skype.

However, to prevent the quashing of cases conducted via zoom or skype, he said the Chairman of the Senate Committee on Judiciary, Human Rights and Legal Matters, Senator Opeyemi Bamidele, has introduced a constitutional amendment to the Senate to empower judges to conduct virtual proceedings.

He advised that since the amendment may not be passed so soon, Nigerian courts should continue to hear matters via zoom or skype or video conferencing adding that until necessary infrastructural facilities are put in place judges should resort to the oral procedure for purpose of tendering documents in evidence and cross-examination of witnesses.

To buttress his submission, he referred to a statement credited to Justice Okoro of the Supreme Court of Nigeria who he said rightly observed Nigerian courts cannot but take cognisance of the fact that we are in an “age of prevalence of information technology”.

To support his position on why virtual proceedings have inevitable to beat the coronavirus pandemic, Falana gave statistics of cases decided in countries that have adopted the technology successfully.

According to him: “As of May 1, 2020, the Supreme Court of India has recorded a total of 22 days of hearing with 116 benches sitting to hear cases.

There were 43 benches for main matters and 73 benches for review petitions. While addressing criticism levelled against the possible extension of virtual hearings beyond the lockdown the apex court issued a note stating that public access to an open court system cannot be “unlimited and unregulated”.

On May 12, 2020, the United States Supreme Court heard arguments of counsel on the telephone for 3 hours and 22 minutes over the subpoena of President Donald Trump’s financial records.

Falana recalled that some heads of courts had issued practice directions authorising judges to attend to urgent cases via zoom or skype following the total or partial lockdown recently imposed on all states of the federation and the federal capital territory by the federal and state governments to contain the spread of the coronavirus pandemic.

He noted that apart from one state high court that has conducted a criminal trial via zoom, others have limited virtual proceedings to motions and cases that can be determined on the basis of affidavit evidence.

“But not a few judges and lawyers have challenged the constitutional validity of virtual proceedings. In particular, it has been contended that judicial proceedings by zoom or skype violate section 36 (3) and (4) of the 1999 Constitution which provides for public trial in civil and criminal proceedings.

“With respect, section 36 (4) (a) of the Constitution provides that the right to a public hearing may be waived in the interest of defence, public safety, public order, public morality, the interest of the welfare of a child under 18 years of age, the protection of the private lives of the parties or to such extent as may be necessary by reason of special circumstances in which publicity would be contrary to the interest of justice. Section 36 (4) (b) thereof also states that a minister of the federal government or commissioner of a state government may apply to a court giving reasons while public trial should be waived.”, he said.

Falana went back memory lane that before the coronavirus pandemic, the rules of procedure and practice directions issued by heads of courts have provided for e-filing and e-service of processes as a result of which it became mandatory for counsel to furnish the courts with their emails and telephone numbers. Thus, hearing notices are served on lawyers and parties by emails or WhatsApp.

He pointed out that such service was given judicial endorsement in C.M.& E.S LTD v. PAZAN SERVICES NIG LTD (2020) 1 NWLR (Pt 1704) 70 @ 95 where the Supreme Court (per Okoro JSC) held that “In the instant appeal, there is evidence that a text message was sent by the registry of the Court to the GSM numbers provided by counsel to both parties informing them that the matter had been adjourned to 15th March 2016. I hold the view that at this age of prevalence of information technology, the service of hearing notice through text message by the registrar of Court is good and sufficient.

“Judges and lawyers who have said that public trials are a sine qua non-condition cannot feign ignorance of section 34 (a) of the Terrorism (Prevention) Amendment Act 2013 which states that “An application to protect a witness may be made by the court suo motu or by the Attorney-General of the Federation or other relevant law enforcement or security agencies.”

“On a more elaborate level section, 232 of the Administration of Criminal Justice Act provides that “A trial for the offences referred to in subsection (4) of this section may not, where the court so determines, be held in an open court.

”The provision shall apply to offences under the Terrorism (Prevention) Amendment Act 2013; Economic and Financial Crimes Act; Trafficking in Persons and Related Offences Act and any other offence in respect of which the National Assembly permits the use of such protective measures or as the Judge may consider appropriate in the circumstances.

“It is further provided that where the court deems it fit to protect the identity of the victim or a witness the court may take any or all of the following measures: (a) receive evidence by video link; (b) permit the witness to be screened or masked; (c) receive a written deposition of expert’s evidence; and any other measures that the court considers appropriate in the circumstances.

CCECC Says It Knows Whereabouts Of The Imported 15 Chinese Medics