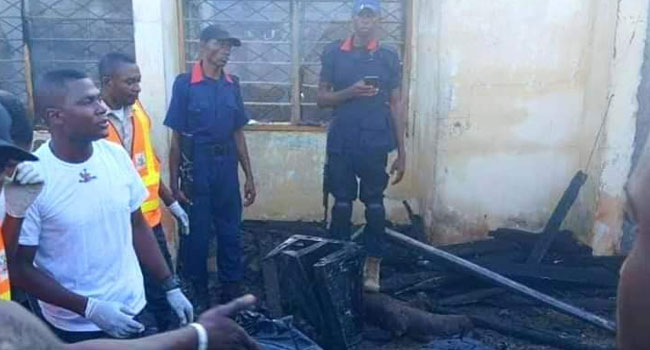 Mr Sekegh Akaa, a substantive Director and Acting Permanent Secretary, Ministry of Science and Technology, his wife and two children were killed by the inferno on Sunday night.

The fire, which spread to three other apartments, caused massive destruction running into millions of Naira.

Meanwhile, the state Deputy Governor, Engr Benson Abounu, has expressed sadness over the incident, describing it as a black day for Benue state.

Engr Abounu visited the scene of the tragic incident, accompanied by the Chief of Staff to the Governor, Arc. Terwase Orbunde; the state Head of Service, Veronica Onyeke and Special Adviser to the Governor on Security, Colonel Paul Hemba (Rtd).

He lamented the death of Mr Akaa and his family and prayed for the repose of their souls.

US Immigrant Ban: Nigeria Would Do Well Without Foreign Interference – APC Chieftain