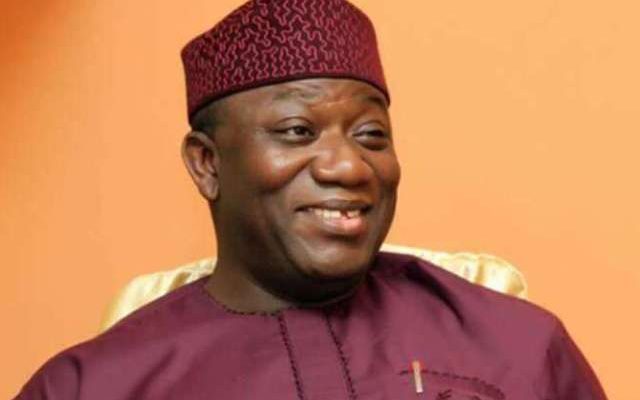 Ekiti State Governor, Dr Kayode Fayemi, on Monday, relaxed the total lockdown imposed on the state since March 29 to prevent the spread of COVID-19.

Fayemi made this known in Ado Ekiti while flagging off COVID-19 Response/Foodbank and distribution of palliatives to 20, 000 indigent citizens in the state.

“I just got out of self-isolation this morning and this is the first state function I will perform.

” Residents are now allowed to move and trade between 6 a.m to 2 p.m on Tuesday and Thursday this week, to restock and undertake economic pursuits that will keep their households till the curfew is finally lifted.

” I decided to keep away from you in order not to return to self-isolation that I had observed, as part of the ways to checkmate the spread of this virus”, he said.

Fayemi said that the curfew had to be relaxed to allow the people restock, clarifying that harsh measure was taken to protect the lives of the populace, in view of the daunting nature of the spread.

” We want to appreciate the tolerance and support of our people since the lockdown began.

” We know that the spread of COVID- 19 was daunting, but with unity of purpose, we will overcome.

READ ALSO: UTME: Check If Your Centre Is Among JAMB’s Delisted Nine Centres

” As part of the measures to protect our people, we shut down the state on March 29 for the initial 14 days with people restricted to their homes.

” But on Tuesday, April 7 and Thursday, April 9, our people be allowed to move about between the hours of 6 a.m and 2 p. m to restock and the details of this will be made available later by the Ministry of Justice.

” We are particularly sorry for the hardship this lockdown and restriction has brought to our people, especially the poor ones”, he said.o

The Governor said the government would work out modalities to give financial support to those whose businesses had been adversely affected by the restriction slammed on the state to rout COVID- 19.

He said in fulfilment of the promises made to the populace, the food items would be distributed to those who are genuinely in need and had registered with the Ministry of Budget and Planning as poverty-stricken individuals.

” Under no circumstances should this palliative be tampered with, until it gets to the right people. The programme is purely apolitical, it has no political colouration.

” The targets are the aged, vulnerable and less fortunate in the society, and let me say that whoever sabotages the programme will be severely sanctioned.

” We are starting with 20,000 vulnerable households in the first phase, with the hope that we shall do more within the confines of our resources.

“We appeal to the private organisations to partner with us in the task of relieving the pains on our people, and we urge those handling this programme to ensure the stimulus gets to the right people just as we appeal that our people must be careful at this precarious time”, he said.

Fayemi said that the government had begun decontamination through fumigation of public places like markets, hospitals, motor parks and other institutions across the state to further tame the spread of the disease.(NAN)

UTME: Check If Your Centre Is Among JAMB’s Delisted Nine Centres