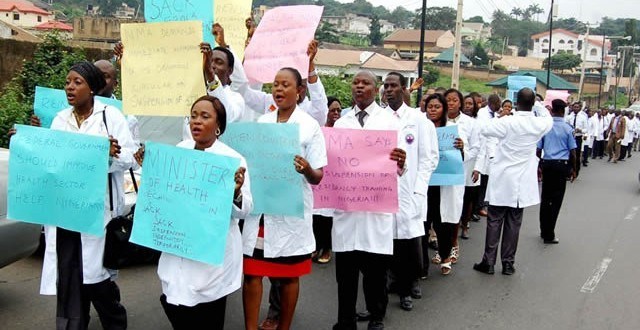 Medical and Health Workers Union of Nigeria (MHWUN) Ekye branch, Doma local government area of Nasarawa state, on Thursday protested over the non-payment of their March salaries by the local government.

Mr Adamu Musa, Secretary of the union-led members to Lafia to defend their petition before the State House of Assembly Committee on Public Complaints, Petitions and Security, Chaired by Mr Danladi Jatau (PDP- Kokona West).

Musa said the union petitioned the council chairman, Alh. Rabo Sani over non-payment of their March salaries, which had created more hardship for the health workers and their family members especially at this critical period of COVID-19.

” We petitioned the Chairman of Doma local government area, Alhaji Sani over non-payment of March salaries to health workers.

READ ALSO: Nigerians Who Have Ever Recharge Above N100 And Those with N5,000 Account Balance Won’t Get Palliative – FG

” This has affected our standard of living and that of our family members negatively, ” he said.

The union’s secretary commended the house committee for ordering for the immediate payment of their salaries within one week, noting that the council’s chairman was used to such acts.

The union also revealed that presently, both the salaries of Health and Education workers were not yet paid.

Mr Danladi Jatau, chairman of the assembly committee, said that after listening to both parties, the committee directed the chairman to pay the affected workers, both health and education staff within one week.

” When we received the petition from the health workers, we also discovered that the staff of the education department have not been paid their March salaries.

” We are hereby directing the council chairman to do all what is humanly possible to pay the two departments, the health and education workers their March salaries between now and Thursday.

” This will go a long way in improving on the standard of living of the staff of the two departments, especially at this time of COVID-19.

” And we don’t want any shutdown of the two affected departments, especially the health sector considering current challenge of COVID- 19″ he said.

The committee chairman assured of its commitment to addressing public complaints by citizens of the state in the interest of peace and development.

The News Agency of Nigeria (NAN) reports that attempts by newsmen to get the reaction of the Council chairman who was also at the assembly, proved abortive as he declined comment. (NAN)

Nigerians Who Have Ever Recharge Above N100 And Those with N5,000 Account Balance Won’t Get Palliative – FG