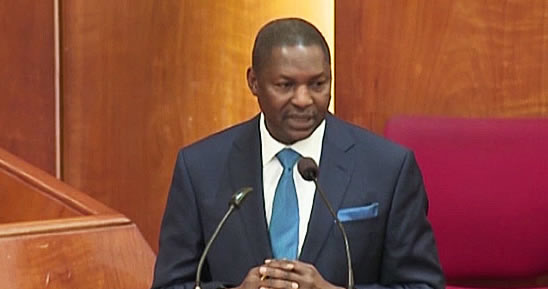 Mr Abubakar Malami (SAN)the attorney general of the federation has said that he had no hand in the dethronement of Mohamed II.

On Saturday THECHEERNEWS had exclusively reported that Sanusi in his suit challenging his banishment from Kano State and detention in Awe, Nasarawa State, named Malami and the Attorney-General of Kano State, Ibrahim Muktar, as the ones who instructed the police and the Department of State Services to arrest and detain him after his dethronement.

Both Malami and Muktar are joined along with the Inspector-General Police, Mohammed Adamu, and the Director-General of the Department of State Services, Yusuf Bichi, as codefendants.

Reacting in a short statement signed by his Special Assistant on Media and Public Relations, Dr Umar Gwandu, on Sunday, Malami said he “was not in any way connected with the dethronement of the former Emir of Kano, Muhammadu Sanusi II and his subsequent banishment to Nassarawa State.”

He added, “The issue of who does what over the dethronement saga has been effectively submitted for judicial determination. The matter is consequently sub judice.

“Attorney-General of the Federation and Minister of Justice will not comment one way or the other over a matter that is pending before the court.”

The dethroned monarch was banished to Loko, a remote location in Nasarawa State.

On Tuesday,  he was relocated to Awe, where he was detained in a guest house up till when Justice Anwuli Chikere of the Federal High Court in Abuja ordered his release on Friday.

READ ALSO: What Deposed Emir Sanusi Says About Getting His Throne Back (VIDEO)

Justice Chikere also directed that the order she issued on Friday should be served alongside the main suit on all the four defendants.

It is expected that Malami and the other defendants would react to the allegations levelled against them in the suit.

The case was adjourned to March 26 for hearing by the judge.

What Deposed Emir Sanusi Says About Getting His Throne Back (VIDEO)

Ekiti Handovers Ten Erring Pastors Over Lockdown To CAN