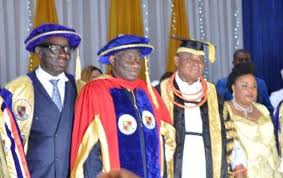 The duo spoke in Edo State during the 17th convocation ceremony of the Igbinedion University, Okada.

Jonathan said better funding of the country’s education sector through collaboration between the public and private sectors will improve access to quality education.

He charged successful Nigerian companies and multinational organisations to channel most of their corporate social spending to fund education and research.

On his part, Governor Godwin Obaseki expressed optimism that the reforms by his administration in the basic education sector, which is being implemented under the Edo Basic Education Sector Transformation (Edo-BEST) programme will improve the quality of intakes into the country’s tertiary education system.

Among dignitaries who attended the Convocation ceremony include wife to Dr Goodluck Jonathan, Mrs Patience Jonathan.

Speaking on behalf of dignitaries honoured by the university, Jonathan acknowledged that the increased number of private universities in the country was a welcome development, noting that it was not possible for government alone to fund education as it demands the concerted efforts of stakeholders.

He stressed that for education to function as an effective tool for technological advancement and industrial growth, successful corporate organisations must play a key role in funding the education system.

“Access to education will improve through collaboration between the public and private sectors which will leave the government to ensure that the quality of academic programmes and the learning environment are not compromised,” he said.

The former president urged Nigerian youths to develop their creative abilities, appealing to politicians to desist from encouraging electoral violence.

He noted that the incidence of violence during the elections held in Kogi and Bayelsa states showed that there was a fundamental problem with the nation’s political system.

Meanwhile, Obaseki said his administration was emphasising basic education to provide a feedstock for tertiary institutions.

He said: “My administration’s reform in the sector is geared towards improving the quality of education particularly at the basic level through training and retraining of teachers, improving school governance, introducing technology.

And building proper infrastructure to strengthen the system and ensure the quality of intakes in the nation’s tertiary institutions are greatly improved.”

The governor also conveyed his heartfelt felicitation to the university community for its success in just almost two decades.

He congratulated the honourees, expressing the hope that the awards will create a link between them and the state.