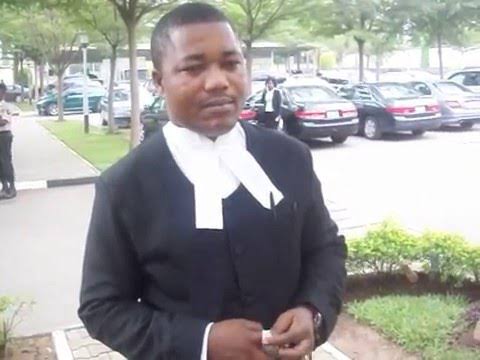 A lawyer to Indigenous People of Biafra (IPOB), Ifeanyi Ejiofor, who was declared wanted by the police on Tuesday has accused the police of attempting to assassinate him.

Mr Ejiofor is also the lawyer to Nnamdi Kanu, the IPOB lawyer who fled Nigeria after being granted bail during trial.

Mr Ejiofor’s house in Anambra State was raided and razed by the police on Monday morning which led to the death of at least four persons including two police officers.

The police named the two officers killed in the violence as Joseph Akubo and Oliver Abbey.

A police spokesperson said Mr Akubo, an assistant superintendent, was attached to the the special anti-robbery squad. Mr Abbey, an assistant commissioner, was the area commander in charge of Oraifite.

IPOB, an outlawed successionist group, however, said the narrative by the police is false. The group said the police attacked Mr Ejiofor’s house unprovoked and shot at people in the house killing at least two of them.

On Tuesday, the police declared Mr Ejiofor wanted over the violence.

“Gentleman, I will like to let Nigerians to know that as we speak, Barrister Ejiofor, an IPOB member and his cohorts have been declared wanted by the command,” John Abang, the police commissioner said.

“And I will seek the cooperation of law abiding Nigerians from North, South, East and West, wherever they find this individual, they should report to the nearest police station or any other security agency for possible arrest and prosecution,” Mr Abang said.

PREMIUM TIMES has now obtained a video of the lawyer recounting his own side of the story.

In the video, Mr Ejiofor is seen standing in a dimly lit unpainted room “narrating what happened.”

According to him, the police first came to his house by 6 a.m. and requested to see him but he was not around.

He said that his elder brother was able to contact him and briefed him about the police presence.

He said he spoke to the leader of the police team whom he simply said was the DPO of the Oraifite police station.

According to him, the DPO told him that “they did not come for him but for one of his boys who was involved in a local matter.”

The DPO, however, said that he would like to see him.

Mr Ejiofor said he promised to see the officer around 10 a.m. same day.

He said it was while he was on the way to the police station that “he got information that police have invaded his house and killed four persons and carted away their bodies with many others injured, including his mother, who sustained bullet wounds”.

Mr Ejiofor alleged that the police intended to kill him.

He called on international agencies especially the Amnesty International to investigate the incident.

The lawyer claimed that more than 20 persons were killed in the attack.

In a reaction to Mr Ejiofor’s claims, the Anambra police spokesman, Haruna Mohammed, denied that the police wanted to assassinate the lawyer.

He said the police were there to carry out their official duties when they were attacked and two of the officers were killed.

He challenged IPOB and Mr Ejiofor to present any evidence that the police killed anybody during the incident.

“You have seen the body of the two policemen burnt in their car, let them provide similar evidence of their members who they claimed were killed”, he said.

The Transcript of what Mr Ejiofor said in the video is reproduced below:

On Sunday, I was called at around 8 p.m. by the DPO of Oraifite Police station. He never passed any message to me. Then in the morning, at about 6am, I got a call from my elder brother, Emeka Ejiofor, that police have invaded my premises led by Area Commader himself.

So, I requested to speak with the Area Commader. And which request was obliged by him. I requested to know why they were in my house because I was not around at that time. He only said that they came to arrest one of my boys who participated in a local conflict.

He however demanded to see me. I told him I wasn’t around and that I will be back around 10am, that when I come back, I will come to the station to see him to know why he is in my house. He said okay to my request. But he emphasised that time is of the essence, that I should keep to time.

So I became worried because I came back since 24th of November 2019 for my brother’s burial and I have been around since that time. The burial was done on 27th of November 2019, we stayed till Sunday when we went for Thanksgiving Service. I never had any issues with anybody, I have been indoors receiving people from all works of live.

When I came back by 10 a.m., I spoke with my mother, I told her I was going to see the Area Commander find out why they were in my house. But on a second thought, I decided to go and see my uncle who will accompany me in that movement. So I left the house to my uncle’s place where I will pick him and that served as a saving grace to the carnage because the target was me.

So we were on our way to the Area Commander’s office through unconventional route when I got a call from my junior brother that the police were in my house and they have opened fire on all living objects in my house including all persons in my house.

I wàs like, somebody came to your house in the morning, you had a discussion with him on offences I don’t even know about and I promised him as a lawyer that I was gonna be in his office at about 10 a.m. to 11 a.m. Then what is happening in my house took me by surprise so I decided to observe.

So I now receded from that movement. And waited until I was further briefed on what was going on. So as the carnage proceeded, my brother kept on furnishing me with development in my house. And after few minutes of our discussion, he told me that four persons have been gummed down in my premises and the entire household set ablaze by the Police.

So I became confused. What have I done to deserve this kind of treatment? So, I decided to take refuge within the neighborhood. As the carnage progressed, the report kept on filtering in as to the atrocities they are commiting in my house including raping people around the area. In the end they took away the four corpses of the people they killed in my house to a place called Nkwo Oraifite and burnt them in their vehicle and left. That is all I know and can say.

However going forward when I read the police statememt yesterday I was shocked. One, the DPO came to my house at about 6 a.m., I spoke with him and I promised him I was going to be with him at about 10 a.m. Then how come he said somebody lodged a complaint against me at about 11 a.m. in the morning?

Then assuming without conceding to the fact that anybody lodged a complaint against me on a case of abduction and all those frivolous offenses, is that sufficient enough to warrant using force in my premises?

I am a Lawyer with addresses, I have two C=chambers, one in Abuja, one at Anambra state and I practice. I am a very serious legal practitioner, I go to court almost everyday. So not that I am going to run away from the police.

However, it is important for me to emphasize that Barrister Ifeanyi Ejiofor has maintained more than 17 years unbroken relationship with police hirachy. They can attest to that fact at Abuja. They know me as a peace loving man, a gentleman of the law, I relate with them in all capacity. I don’t look for problem. I am not the enemy of the police. So why should such thing happen?

I was also further informed on investigation that the people behind the carnage in my house include a controversial businesses man in Oraifite who has built library in Katsina and also schools in Katsina. That he has undertaking from the Fulani caliphate that he is the only one that will see to my killing.

If the intention of the people that came to my house was to arrest me, they would simply demand to see me or leave an invitation letter for me to come to the police. They are interested in getting me out of the way. They were actually interested in killing me. Because the goverment have seen me as a torn in their flesh. Because I am defending members of IPOB and Nnamdi Kanu.

Anyplace they arrest any IPOB member I will be there to bail them. I have been in court with them in many states and I have been defeating them in virtually almost all the cases because IPOB are merely exercising their rights as constitutionally provided, so they are not terrorist organization.

I am calling on UN, UK, Amnesty International to get involved and investigate the carnage in my house. As I speak to you, I am homeless. They burned down virtually everything.

And further more, it is important to clarify that many people were killed in the process. Now, I learnt that many people that were running inside the houses that were burning were burnt to death. So until when an access is given to people who will investigate what transpired in my house we cannot be able to determine the number of people that were killed. Because I can assure you that over 20 to 30 persons have been murdered on account of this incident.

My mum was also shot, she sustained a serious gun injury though she is receiving treatment.

So, I don’t know the offense I have committed for becoming a Lawyer for IPOB. I don’t know how I got it wrong. I am also calling on NBA to intervene. If my house can be attacked in this manner by the police in conjunction with the Millitary it shows that no one is safe in the SouthEast.

Billionaire Couple Pledges $750m to a School in US