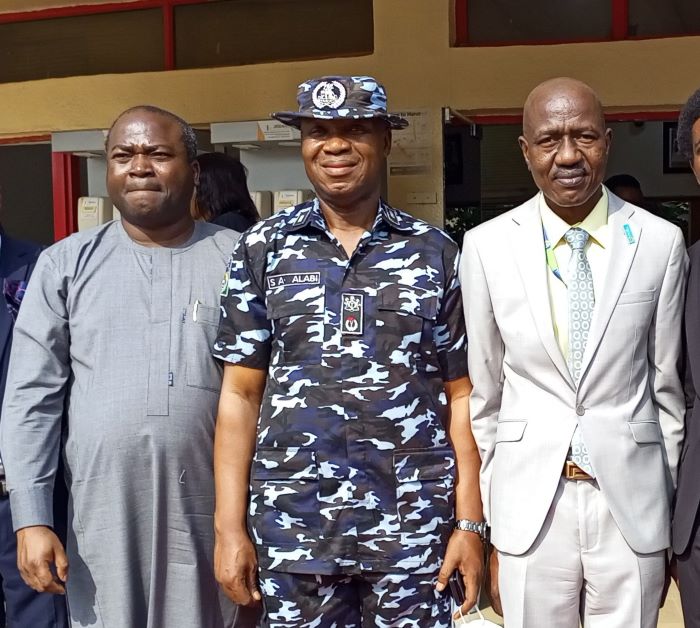 Lagos State Commissioner of Police, Sylvester Alabi, has on Friday promised to beef up security at the Caleb University, Imota, Lagos State by creating a police stand at the institution’s gate.

Speaking during a courtesy visit to Caleb University, he pledged that a police patrol team would be established along the highway in front of the university’s gate as demanded by the school authority.

According to the Police Commissioner, the security initiative would prevent undesirable elements and criminals from carrying out any attack on the university.

He said he believes that the presence of police operatives in any location would deter criminals from committing any havoc.

He said: “Ordinarily, the police usually do not establish such points around universities to prevent students from being afraid of creating unnecessary panic.”  Alabi, nevertheless vowed to do it for the institution because of the request of Caleb University’s Vice-Chancellor,  Professor Nosa Owens-Ibie.

According to Alabi, the conduct of Caleb University students shows a sign of good leadership and mentorship from the school authority, as the police force has not heard any report of vices from the students.

Alabi, pointed out also that the issue of trespasses into lands belonging to the university by land grabbers and “omo onile” is not peculiar to Caleb University but a major problem, which will be dealt with holistically.

“Trespassing is a criminal act and when someone commits a crime, he or she should be arrested and the law enforced to deter others from doing the same thing,” he said.

The CP reassured the university and its community of his continuous support, partnership and engagement.

He charged residents of the state to partner with the police by giving the necessary support and information that would enable policemen to carry out their duties.

Alabi urged police officers to conduct themselves in accordance with the rule of law when dealing with civilians.

He said: “I am an advocate of human rights and would expect that civilians should be treated as human beings that they are.

“Respect other people’s rights, don’t humiliate or harass them. “You are paid to protect and not harass them.”

Meanwhile, Professor Owens-Ibie while welcoming the CP had earlier appealed to Mr Sylvester Alabi, to save the institution from the menace of land grabbers who are trespassing on the varsity’s land.

According to the VC, the activities of the trespassers are affecting the commencement of work on the institution’s Medical College project.

Owens-Ibie also said a number of times, the land speculators had threatened the lives of the staff of the school, including the Bursar.

His words: “There is a portion of the school’s land that has been earmarked for staff housing and we were about to fence the place when these land grabbers called Omo Onile showed up and beat up everybody and disrupted the work. Our Medical College and some projects billed for the Ajah-Awoyaya axis are being disrupted too.

“We took bank facilities to acquire the land and all the titles and deeds properly obtained. But these land grabbers also prevented us from starting work. In fact, one particular day, they chased away everybody including our Bursar. A Lagos State government project was supposed to be sited on our land in the main campus here, but the people did not allow that.”

He urged the CP to establish a permanent police patrol team pin-down point along the highway in front of the university gate to discourage undesirable elements and criminals from any attack on the university.

Owens-Ibie, however, lauded the police formations and security agencies around the Ikorodu-Imota axis for their cooperation and support for the university.