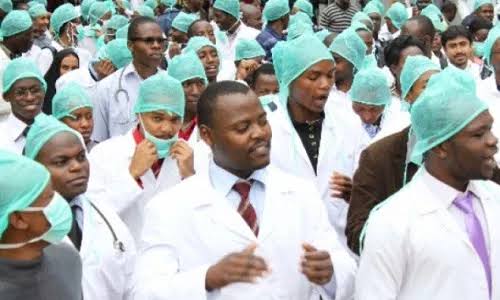 Lagos State doctors, under the aegis of Medical Guild, have rejected the new minimum wage paid to workers by the state government. They argued that the new salary was below the expectations of civil servants.

Dr Babajide Saheed, Chairman of the Guild, made the doctors’ decision known on Monday at a media briefing on the Scientific Conference scheduled to hold on Dec. 3 and 4 in Lagos.

The News Agency of Nigeria (NAN) reports that the Medical Guild is the association of doctors under the employment of the Lagos State Government.

Saheed said that not only was the new minimum wage unacceptable, the Guild was not part of the negotiations which was communicated to government, adding that it was still awaiting response.

“You cannot be talking about our salary when we are not there; and when workers started receiving their salaries over the weekend, they were disappointed and unhappy.

“Not only the doctors, generally, all the civil servants, because the increment was unimaginable and short of expectations. “The problem we have identified is high taxation

. “No matter the amount of increment in the minimum wage, which makes the gross high, but the take-home after-tax reductions is peanuts.

“Government should look at that issue and let workers have the benefits of the new minimum wage, and we hope that the state government will listen,” he said.

Saheed called for the exemption of tax on-call duty paid to doctors, saying it would lighten the tax burden on members of the Guild, as was the practice during the administration of former Gov. Bola Tinubu.

He also called for a review in the retirement age of medical doctors to 65 years, adding that the same had been done for teachers.

The chairman said that to address issues of shortage of medical personnel, exit replacement of staff should be done in phases, with about 25 per cent done by the end of 2019.

According to him, the remaining 75 per cent should be done before the end of the first quarter of 2020.

“This is to reduce the pressure of physical and mental exertion on health workers,” Saheed said.

He said that improvement in the welfare of workers would stem the current brain drain affecting the sector.

Saheed said that incentives like car and housing loans would help to boost morale in the health sector.

Oseni said that government should be held responsible and accountable for problems of service delivery in the health sector and not the workers.

He also appealed to the Nigerian Police to desist from harassing and arresting medical doctors over deaths of patients, saying the issue might discourage doctors from treating patients if not stopped.

Meanwhile, Mr Tunbosun Ogunbanwo, Director, Public Affairs Department, the state Ministry of Health, when contacted by NAN, said that he could not respond to the guild’s rejection of the new minimum wage.

Ogunbanwo, who claimed that he just heard about the issue, said that the Commissioner for Health could not also respond to the issue. (NAN