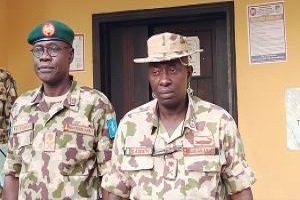 Yahaya took over from Maj.-Gen. Olusegun Adeniyi, who was redeployed to the Nigerian Army Resource Centre as Senior Research Fellow.

In a brief ceremony, at the Military Control and Command headquarters in Maiduguri, Yahaya was presented with the Command flag by his predecessor after signing the hand-over and take-over notes.

In his remark, the new commander sought the cooperation of all the components in the theatre to enable him to succeed in the ongoing operations against insurgency in the Northeast.

“I solicit the support of all the components in the theatre; I am talking about Maritime, Air Force and other security agencies to enable us to achieve total peace and sanity in the Northeast”, Yahaya said (NAN)