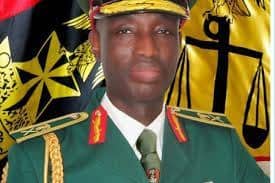 Before  Shalangwa election as president, Shalangwa  has been the Director, Nigerian Army Legal Services.

Shalangwa is a seasoned military legal adviser in many countries across the world.

He had attended several seminars, workshops and conferences on different aspects of military and civil laws globally.

Other seminars he had attended include, Law of Armed Conflict in Spiez Switzerland and Legal Aspects of Counter-Terrorism in Ghana.

Shalangwa is also the Chairman Armed Forces and Security Committee of the African Bar Association.

He has been a member, Board of Directors/Governing Council of many Nigerian Army Legal/Corporate entities.

The AMLF is sponsored by the United States Africa Command. AMLF is a veritable platform which gathers African military legal professionals together annually to discuss military international best practices.

Recall the role Yusuf Ibrahim Shalangwa played in search of justice for the 38 army in October, 27, 2017 when he was a Brigadier General in Nigeria. it was published on 27 October, 2017 by Vanguard online.

”The Senate Ethics and Privileges Committee on Tuesday October 17, 2017 held a hearing on a number of petitions against the Nigerian Army.

Recruits undergo training at the headquaters of the Depot of the Nigerian Army in Zaria, Kaduna State in northcentral Nigeria, on October 5, 2017.

However, one particular petition from a certain retired Colonel Chidi Ukoha stood out.

The retired army officer was among a group of 38 officers known as ‘Army 38’, who were summarily retired in June 2016 on allegations of partisanship in the 2015 general elections and involvement in the arms contract scam.

The officer described a pitiable tale of woe that left me scratching my head, wondering why we are so insincere and unjust as a nation.

He informed the committee that he worked at the Defence Headquarters in Abuja throughout the 2015 elections where he was in charge of the military workshop.

He stated categorically that he was not assigned any election duties and remained at his duty post in Abuja on election day.

He mentioned further that he had neither served in any procurement office nor was ever queried, charged, tried or found guilty of any offence.

He also noted that if he had any disciplinary issues he would not have been promoted to the rank of Colonel in December 2015.

He said that after serving the Nigerian Army unblemished for 23 years, the least he deserved was to be informed of any misdemeanour he may or may not have committed.

He stated in a voice laden with emotion that he was not granted fair hearing and was shocked to hear of his summary retirement through a text message.

He informed the committee that despite his appeals and several petitions he was yet to be furnished with details of any offence and there was equally no response for the past 16 months except that the issue was receiving ‘due attention’.

He stated that his family had suffered untold hardships due to the sudden retirement and caring for them was becoming a huge burden as he was unemployed.

He therefore prayed the committee to reverse his unjust compulsory retirement and cause the Nigerian Army to reinstate him.

The Army apparently not wanting to be embarrassed like when its earlier representative, a major, was walked out of the hearing, sent a high powered delegation led by a Major General Rabiu, the Army Secretary.

He was accompanied, amongst others, by one Brigadier General Yusuf Shalangwa, the Director, Army Legal Services.

The Brigadier Shalangwa did most of the responding because he said by appointment he treats petitions of such nature.

This earned the utter disgust of a committee member, Senator Jerry Useni, who was at a loss as to why he spoke instead of the army secretary.

Remarkably, when asked to inform the committee the nature of the ‘serious offence’ committed by Colonel Ukoha,

Brigadier Shalanwga fumbled and wobbled through the files he held and stated that “the army was aware of the officer’s appeal and it had been forwarded to the Presidency for consideration”.

Surprisingly, there was no evidence of the ‘serious offence’ warranting his sudden retirement in the officers’ file!!! Brigadier Shalangwa must have felt that this information would assuage the committee members, rather it infuriated them.

Senator Ovie Omo-Agege remarked with dismay that after over oneyear the army could not inform the committee the exact reasons for the officers’ retirement.

He further said there were several similar petitions regarding these retirements where the petitioners stated they had no involvement in electioneering or arms contracts, neither were they queried, charged, tried or found guilty of any offence.

Senator Omo-Agege, also said the Nigerian Army belonged to all Nigerians that “taxpayers funds have been used to train young men whose careers have been cut for no just cause and that this was not right for the growth of the nation”.

Senator Joseph Ogba corroborated his views and expressed sadness that he observed during the retired officers’ heart wrenching testimony, members of the army delegation giggled and laughed amongst themselves at the misfortune of their former colleague but yet they could not provide any evidence of the alleged offence committed by the officer or any proof the army granted him fair hearing.

He noted that this lack of empathy was most disappointing and that from what he had heard the officers were quite competent.

For instance, one of the 38, a Colonel MA Sulaiman, is a Member of the Federal Republic, an award received for his gallant efforts in facilitating the rescue of seven French nationals during operations in the North East.

The Chairman then asked Brigadier Shalangwa if it was fair, that after discharging his army duties as he was currently doing, he was unexpectedly retired the next morning without being accused of any offence or granted fair hearing.

Shalangwa suddenly began struggling with his microphone and mumbled something which was inaudible to the audience.

The Chairman asked him to repeat himself and speak louder before he said: “No sir, it is not fair”.

The Chairman remarked that Colonel Ukoha would be used as a test case in conjunction with other cases to review the retirements.

The army delegation almost buried their heads in shame as it was evident from the responses of the Director, Army Legal Services the sheer incompetence and impunity associated with the retirements, as after 16 months the army could not justify the illegal retirements nor provide evidence of due process.

The unjust nature of the retirements was further revealed by the stunning silence of the Army Secretary.Apparently hindered by his conscience,