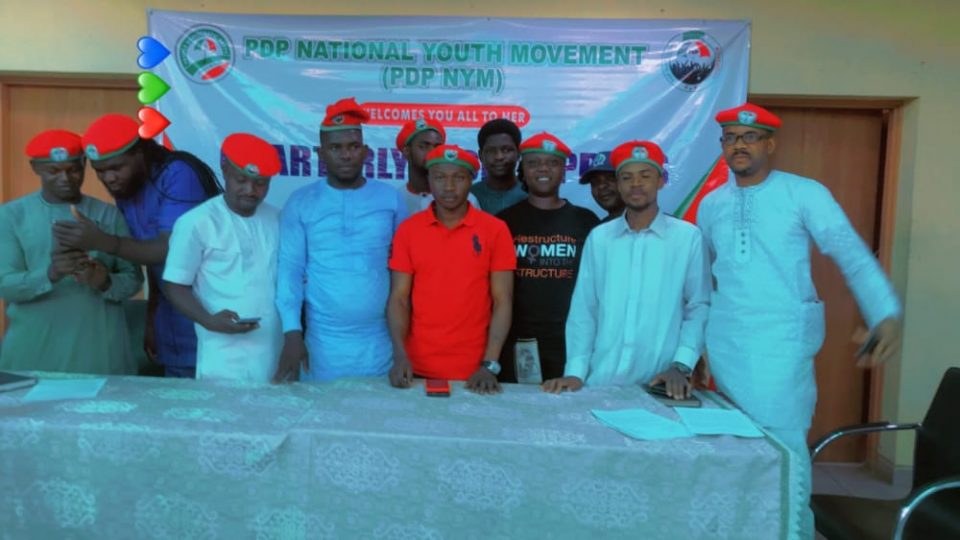 This is just as NYM also urged members of the party not to attack one another, but unite ahead of the 2023 general elections.

NYM national leadership in the six zones, on Thursday in Abuja during their 2022 quarterly world press conference held at NUJ National Secretariat unanimously pleaded with some aggrieved members to sue for peace.

Speaking at the conference, its National President, Engr Amb Salahudeen A Lukman said: ”We humbly congratulate the National Executive Committee of our great party PDP under the chairmanship of Distinguish Senator Dr Iyorcha Ayu and her National executive members with a special expression of satisfaction.

”We commend the new leadership for her dexterity and total commitment injected in the pilot of the party affairs with absolute transparency, equity and fairness so far so good, her prompt response to the crisis and unprecedented wisdom deployed in managing such an inevitable crisis is another great scarce leadership skill of the Sen Ayu led NEC of PDP which deserves commendation by all and sundry within and outside the party.

”PDP–NYM hereby passes a vote of confidence on Sen. Ayu led PDP NEC, declare her total support, unalloyed commitment and total dedication to the actualization of the Rescue and Rebuild Agenda of the party as we officially offer ourselves as rescue and rebuild mission foot soldiers who shall not only mobilize Nigerian people both old and young to get PVC and vote PDP but serve as an independent Army.

”We shall stand firm to protect PDP votes at various polling units across the country to ensure no manipulation and shortchange of any kind come 2023 General Election.

”We congratulate the party flag bearers for OSUN and EKITI Gubernatorial elections while calling on youth in these states to embrace PDP by canvassing and mobilizing voters to vote PDP and her candidates on the election day.

”We wish to appeal in strong terms to the duo of H.E Gov Ezenwo Nyesom Wike of Rivers State and his counterpart H.E Godwin Obaseki of Edo State to end the trade of words in public.

”It’s of nobody’s interest the needless war of worthless words of supremacy between the duo. It’s important we remind the duo and other stakeholders that the task ahead needs our consolidated effort, maximum cooperation and total commitment with an open mind as we are to battle Nigeria’s continuous survival and existence alongside the mission to rebuild the already destroyed nation.

”A Nation with the lion APC who have already held hostage the progress and prosperity including the soul of our dear Nation, feeding fat on our common patrimony and mocking Nigeria masses of the calamity they have imposed on the citizen.

”To rescue and rebuild Nigeria therefore should be our ultimate goal and target while we all jettison personal rifts, self-aggrandizement and wanton ego.

”Every individual is important, as we all have legitimate stakes through the membership card of this great party. We further urge the duo to find space in their respective heart to forgive each other for whatever must have gone wrong in the course of this supposed family affairs disagreement that turn public altercations.

”We remain optimistic that our great party PDP will sustain this her uncommon youth loving stride and passion for practical involvement of youth in Governance and Party Administration.

”It remains pertinent we remind our leaders and stakeholders both at National and State that since the emergence of 25 years old youth by all definition and standard as our party National Youth leader, the hope of teeming Nigerian youth population has been raised with unprecedented confidence in our great party PDP to return to power.

”We hereby salute the PDP NEC for the considerable price tag on Nomination and expression of interest form with a 50% reduction for youth between ages 25-30years, while appealing for expansion of the age brackets to 18 to 40 years in order to enable youth participation at all levels.

Surely without fear or favour, this remains first of its kind in the political history of Nigeria, the most youth-friendly and much afford party nomination price tag ever.

”We commend our National Youth Leader for this unprecedented record-breaking achievement during his reign, we equally implore the party to consider concession of a reasonable number of tickets to youth under 40 years running various elective elections under the party come 2023.”