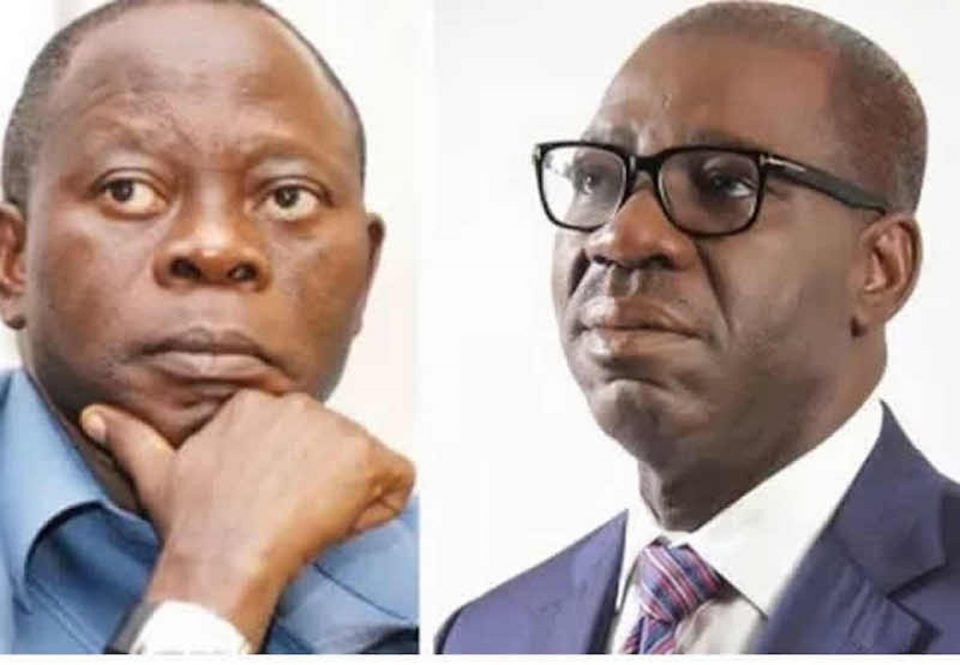 Some people have planned badly against Gov. Godwin Obaseki to disqualify him not to win his second term.

The party has fixed the screening of the six aspirants that have purchased, filled and submitted nomination and expression of interest forms for Wednesday and Thursday.

A member of the NWC of the APC said “dangerous” discrepancies had been uncovered in the forms submitted by Obaseki to the party’s secretariat in Abuja.

The party chieftain who did not want to be named said those who were against the candidature of the governor were going to capitalise on the discrepancies to disqualify him.

He said, “Except for divine intervention, Obaseki will not scale through the screening. This is because even we that have little sympathy for him, may not be able to help. The discrepancies are too glaring to be swept under the carpet.”

Asked to disclose some of the discrepancies, he declined, saying “go and check on Monday at our secretariat, look at it, you may see some.”

The spokesperson of the party, Mallam Lanre Issa-Onilu, had on Friday, said the various submissions would be displayed at the party’s national secretariat in Abuja and in Benin City, the Edo State capital, for claims and objections today.

Recall that controversies revolving around Obaseki’s certificate first started in 2016 when he contested for the governorship. Last week, three APC members instituted a forgery suit in Abuja against Obaseki.

Speaking during a “thank you” tour to principal officers and ward leaders in Oredo Local Government Area of the state at the weekend, Gov. Obaseki punctured the claims on his certificate. He said, “They say I forged my certificate.

How can you forge the certificate of the University of Ibadan (UI)? I am not like those that burn buildings to cover up their certificate issues.”

Contacted to speak on the discrepancies, Issa-Onilu said, “ It is only after the screening that one will know who has issues or not.” NWC divided Meanwhile, it was gathered that the plot to disqualify Obaseki has created a fresh division in the NWC.

While some of the 21-member committees are with the plotters, others are not. The feud between the APC National Chairman, Comrade Adams Oshiomhole and Obaseki has also polarised other organs of the ruling party.

Obaseki had last week asked Oshiomhole to recuse himself from the nomination processes of the primary. The party has not acted on it. Some members of the NWC declined to comment on the matter. However, one of them who spoke anonymously, said, “Oshiomhole does not have a personal role to play in the Edo primary, neither do the members of the NWC.”

If I have anything to tell you, I will let you know. For now, I don’t have an answer.” Obaseki, last week, was at the Presidential Villa, Abuja, where he presented his forms to President Muhammadu Buhari.

Apprehension at Edo Government House Meanwhile, our correspondent in Edo reports that there is apprehension at the government house in Benin City as some staff are afraid that Obaseki may be denied the APC ticket.

But a source at the government house told Daily Trust that although there was apprehension somehow, the governor was leaving no chance in his bid to get a second term.

The source said, “So, I can tell you that the governor is not a pushover in the fight for the party’s ticket. He is doing the underground movement to ensure that he gets the ticket.”

Another source in Gov. Obaseki’s camp who only gave his name as Johnson expressed optimism that the governor would get the ticket. Johnson said, “Obaseki is exploring all options, including settlement of the House of Assembly crisis, and also a judicial option by challenging the waiver given to Ize-Iyamu.

“Oshiomhole thought they will just push Obaseki aside, but they have seen that he is not a pushover. He is exploring other options which I can’t disclose to you now.”

Atiku Shortlist As Commissioner in Adamawa

Bankers Tasked On Digitisation To Boost Economy During Covid-19 Pandemic