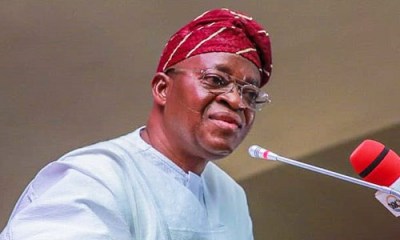 Osun State has commenced the investigation and probe of the distribution of 6020 adulterated bags of rice shared among the vulnerable and the poorest in the state.

Recall that there was an outcry in some parts of the state, following the distribution of 6020 bags of rice shared by the state government on Wednesday, as residents were complaining bitterly about the quality of rice shared.

The Commissioner of Information and Civic Orientation, Mrs Funke Egbemode, in a statement on Saturday, said, “the government had received complaints that some of the distributed bags of rice may not have met the expected quality.”

Egbemode decried the complaints received by the government from the citizens that some bags of rice share were adulterated.

Her words: “The State government was pained by the development and had immediately begun an investigation to establish the source of the affected few bags.

“The leadership of Governor Adegboyega Oyetola is particularly pained by this development, considering the fact that it has never compromised quality in its provision of economic stimulus for the people of Osun in spite of its limited resources.

“We are a responsible and responsive government that places a premium on the well-being of its people and would not do anything to jeopardize its citizens’ health. Upon receipt of the complaints, the State Government has immediately begun investigations to establish the source of the few bags that appear not to have met the quality expected.”

She noted that all the 6020 bags of rice were purchased in the state and the government has invited all suppliers to unravel the source of the problem.

“The State government had invited all suppliers and vendors from whom the relief materials were purchased, for questioning in order to identify the source of the problem.

“We assure our citizens that upon unravelling what went wrong, the State Government will take necessary punitive measures against the erring Supplier(s) or Vendor(s), including de-listing such vendor from the Government’s directory and even proclaiming a disclaimer to that effect,” she added.

26 Suspects Arrested For Armed Robbery, Cultism, Others In Abuja