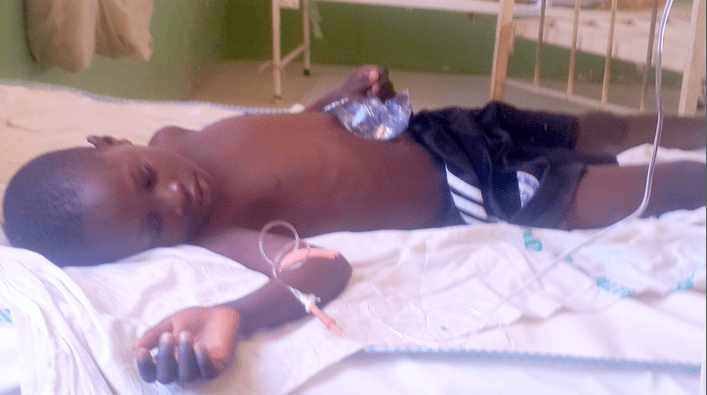 My name is Bashiru Wahab, and I just lost my precious 4 year old son, thanks to the incompetence of Lagos State Government health workers/system.

I am certain that I am not the only one who has lost a loved one due to our broken health system, but I hope that my story inspires you to share your story. Something needs to change.

I want justice for my son, Kehinde Bashiru.

My son, Kehinde was complaining about his stomach. He was vomiting heavily, crying, saying he felt a lot of pain. We were confused. He kept crying. On Friday morning (December 3rd, 2021), my wife and I drove quickly to a nearby primary healthcare center called Ipinlerere Health Center, Alimosho.

When we got to the health centre, there was no doctor available. There were a couple of admin staff, but no physicians present. I was upset, what do they mean there was no doctor to attend to us? This is an emergency, my son was throwing up vigorously, he was in so much pain, and there’s no doctor or nurse to look at him at the primary health center?

The staff apologised and referred us to General Hospital, Orile, Agege. My son was looking pale and helpless at this time.
He was urgently admitted at the General Hospital. We were told to buy injections, drips and some other medical items, which we did. We also did a blood test, and he was passed some drips but there was no improvement.

We were told a doctor was coming to do a checkup on him very early the following morning, and also give us a report. Unfortunately, the doctor did not arrive until 5pm; Saturday evening. On arrival of the doctor, he checked him up but didn’t hand us the report until around 7pm. Also referred us to LASUTH, Ikeja.

It was getting late. My son was defecating, still vomiting heavily, screaming. My wife asked the staff if the Ambulance could be used. They said it used to cost #5,000, that the price had probably gone up. I was upset, paying for an ambulance? In an emergency? I picked my son up, hurriedly and beckoned my wife to leave. We rushed back to my car, tucked my boy in the back seat, his mom crying now, because our baby was doing very poorly. We got to LASUTH at past 11pm, with a baby that was screaming his lungs out because of the pain he was in. And yet, it took over an hour to get the attention of the staff at LASUTH hospital.

At that critical time, we were forced to register and pay for a card. After wasting time to get the card, we were then told there was no bed. Then they referred us to to the Federal Medical Center (FMC) in Ebute Meta. The time was now past 12 midnight. A staff member told us that our boy was in a critical condition (surprise), and they couldn’t admit us without a bed.

If you stay in Lagos or know Lagos, you’ll know how unsafe it’s been lately. While we were in LASUTH, a man ran in saying he was almost robbed at the junction, two men had pulled a gun at him, so he ran into the hospital. I was scared, how do we carry this child to Ebute Meta at this time by ourselves? I braved it, rushed down to my car with my wife and son and drove to FMC.

When we got to FMC, they were quicker to respond. They told us to wait for a bit, that we needed to see a specialist. The referral note from the previous hospital had said that our boy had stomach troubles, we needed a paediatrician who’s a specialist with stomach problems. After waiting about 20 minutes, the surgeon (Dr. Fakunle) arrives. He was kind and quick to act. He asked us to do an x-ray and buy some medical items. We returned with what he told us to buy, and the the x-ray. He confirmed our boy had an intestinal obstruction, that we could have lost him if another minute was wasted.

He attended to our son immediately. Passing a tube through his nose to the belly, to clear out the obstruction. After the procedure, the doctor assured us that our boy would be fine. Our boy looked fine. He was calm. The doctor left and handed over to a young male nurse (Obafemi), and that’s when things started to get bad.

The nurse looked unkempt, appeared nonchalant, and distracted. I asked him what he was going to be giving my son, he looked at me like I was crazy for asking and muted “drip.” As he was installing the drip, he was distracted. I was immediately worried.

Less than 5 minutes later, my boy began to scream and shake aggressively. I knew something was wrong. I was confused, I ran out of the ward screaming, help o, my boy is shaking o, help, where’s the doctor?

I found the nurse (Obafemi) in the lobby chatting with one of the cleaners. Sir, please come take a look at my boy, he’s shaking, I pleaded. The nurse ignored me, like I wasn’t there. I kept begging him to listen to me and asking why I was being ignored. I asked him about the whereabouts of the doctor, He ignored me, talking on phone. My wife then came out screaming, saying that Kehinde was dying. She knelt on the floor begging the nurse to come see our son. That’s when the nurse said that the doctor had left, and that Kehinde was shaking because the drip was giving him energy. Whatever that meant.

I asked my wife to go back to the ward to stay with our son while I handle things.I was making a scene at this point, asking to see an administrator, a matron, any doctor, someone… no one answered. They kept saying my boy will be fine. After making a nuisance of myself, the nurse was finally ready to check on my son, when we went back to the room, we found Kehinde dead, he died in the arms of his mother.

The nurse started to apologise, saying he was sorry for ignoring me. I went ballistic. Screaming and cursing. My son was dead. I went back to the lobby and started shouting, saying I was going to make sure the governor heard about this atrocity. That’s when the matron came out, along with a man who claimed to be the hospital’s PRO. They started to plead with me. I was upset. So these people were in the hospital when I was screaming and begging that someone attend to my son? What kind of evil is this?

My 4 year old son is dead. He and his twin brother would have turned 5 in a couple months, and now he is gone? I feel so helpless. I want justice. My son didn’t have to die. Why did the doctor leave after an operation? Why was my son left in the hands of an incapable nurse? Why was my cry for help ignored? Why did my son or anyone have to wait long hours/days to access medical treatments? So many questions!

I am calling on the government to investigate this and hold the hospital accountable. Please help me share this message. My son didn’t have to die.