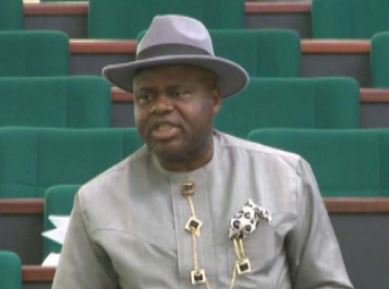 The candidate of the Peoples Democratic Party (PDP) in Saturday governorship election in Bayelsa, Senator Douye Diri has declared that he was the winner of the election.The Independent National Electoral Commission (INEC) had declared All Progressive Congress, David Lyon winner in a landslide victory on Monday morning.

However Diri in a press conference on Monday said INEC and the Nigerian Army connived with the APC to rob him and the PDP of their victory.

According to him results collated from the PDP situation room indicated that he won Lyon in all the local government areas of the state.

Aside that he said based on the Court Judgment delivered APC was not on the ballot and any vote for it would be void.

He maintained that by legal provisions, APC should not have participated in the election and wondered why INEC would not produce the Court order that directed it to include APC on the ballot.

“We believe that the subsisting court judgment that disqualify APC as of the time the election was conducted. The request by PDP agent at the state collation center, Dr Don Osusu that INEC should produce the order which made APC presence during collation legitimate was ignored. We urgently call on INEC to declare me winner. It is only shameful and laughable that INEC would manufacture figures. For us the rule of law is under threat in this democracy; anarchy is looming in this democracy, democracy is being raped.  All the figures reeled out are a charade and a ruse.”

Diri who listed several areas in the state where APC leaders and Nigerian Army intimidated, harassed and molested PDP leaders regretted that INEC staff were also kidnapped and forced to accept fake results.

WAEC, NECO Get N600m From Niger State For Students’ Registration

Funtua Drives Self To Hospital, Dies