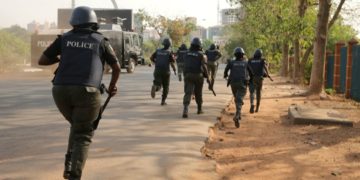 The state police spokesperson, Haruna Mohammed who disclosed this on Saturday in a statement, said the duo were nabbed in a fierce gun battle in Aro Ngwa, Owerrinta, Abia State.

He said one revolver pistol, four lives ammunition and victim’s body killed by the abductors after collecting N3m ransom were recovered from the suspects.

He said, “At about 03:30am following actionable intelligence, Puff-Adder operatives in conjunction with the Command Special Anti-robbery Squad (SARS) tracked and arrested at Aro Ngwa, Owerrinta in Abia State one Anthony Robbert ‘m’ aged 25 years and one Udoka Nwoko ‘m’ aged 27 years after a fierce gun battle.

“Suspects who were fatally wounded during the encounter had on the 3/11/2019 kidnapped one Amaechi Ike ‘m’ at Awada in Onitsha, Anambra State, collected three Million Naira ransom from his family and still went ahead to kill the victim.

“Suspects voluntarily confessed to the crime and immediately took Police detectives to the locus where they buried the victim in a shallow grave.

“The corpse was exhumed and recovered as exhibit.

“One locally made revolver pistol and four life ammunition of .9mm were equally recovered from the suspects.”

Mohammed disclosed that the suspects were taken to the hospital for medical attention, adding that the perpetrators would be charged after investigations were concluded.

“The Commissioner of Police CP John B. Abang assures “Ndi Anambra” and the general Public that the Command under his watch will continue to hunt all the criminals in the state until they relocate from the state or refrain from perpetrating crimes.

“The CP further enjoins the public not to relent in providing useful information that would assist the Police towards protecting lives and property of all the citizenry in the state,” he added.

Arik Not Qualify At Present As National Carrier – Aviation Minister