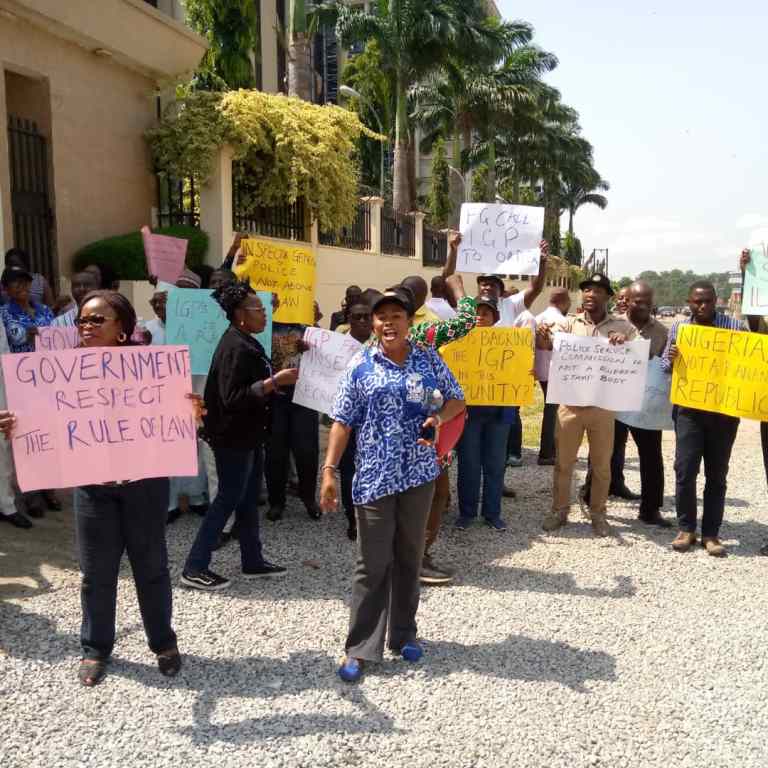 Staff of the Police Service Commission (PSC), on Wednesday, staged a protest at the Federal High Court, Abuja, over the alleged recruitment of 10,000 officers by the Inspector General (I-G) of Police, Mohammed Adamu.

The protesters, under the umbrella of the Nigerian Civil Service Union, PSC Chapter, carried placards with various inscription to press home their demands.

The demonstration took place simultaneously as Justice Inyang Ekwo of Federal High Court Abuja delivered ruling on the matter brought by the PSC against I-G Adamu.

Secretary of the staff union, Mr Remi Ogundeji, said the staff were protesting against the usurpation of powers of the commission by the I-G Adamu.

“We all know that it is the constitutional rights of the Police Service Commission to recruit, promote and discipline Nigerian police officers,” he said.

Ogundeji said that the PSC and the I-G both began the recruitment exercise together before the commission was no longer carried along by Mr Adamu.

“We have instituted an interlocutory injunction to stop the exercise and we sought for the interpretation of the constitution that stipulates the functions of the PSC,” he said.

NAN reports that earlier, Justice Inyang Ekwo, ordered Adamu and the PSC to maintain a status quo on the ongoing recruitment of 10, 000 officers.

Ekwo gave the order at the hearing of the case brought by the PSC against the I-G. News Agency of Nigeria (NAN) reports that the PSC had brought the matter before the court, asking it to stop Adamu from continuing the recruitment exercise for usurping the power of the commission.