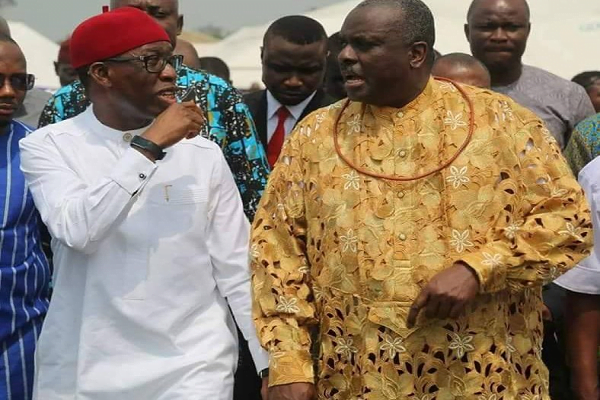 The politics of godfatherism has come to the fore again in Delta State as kingmakers under the People’s Democratic Party (PDP), seek a successor for the outgoing incumbent Governor Ifeanyi Okowa come 2023.

The enlarged ‘caucus’ meeting of the People’s Democratic Party, Delta State chapter, which was held ahead of Saturday’s Mega Rally to determine who will succeed governor Ifeanyi Okowa, was said to have ended in deadlock.

A source who confided in our correspondent said no zoning agreement was reached on the senatorial district to produce the PDP governorship flag bearer for the 2023 election.

“The meeting was adjourned and no decision was reached until the next caucus meeting. The issue of who will succeed Okowa come 2023 never came up and was never on the agenda of the meeting,” the source said.

It was also gathered that the party’s Chairman, Kingsley Esiso, had moved the motion for the zoning of the governorship to Delta Central and was supported by Senators Stella Omu and Elumelu.

But Manager and the former State Chairman of PDP, Edwin Uzor, were said to have opposed zoning it to Delta Central.

Meanwhile, former governor James Ibori had said to have vowed to push his choice of candidate, David Edevbie, who hailed from Delta Central; a decision which was against Okowa’s choice.

However, the PDP Mega Rally is being held on Saturday, January 22, 2022, and the party are expected to announce the direction where the governorship candidate would emerge from.

How Aliko Dangote Gets $1.3b Richer Through Cement Share Price – Bloomberg