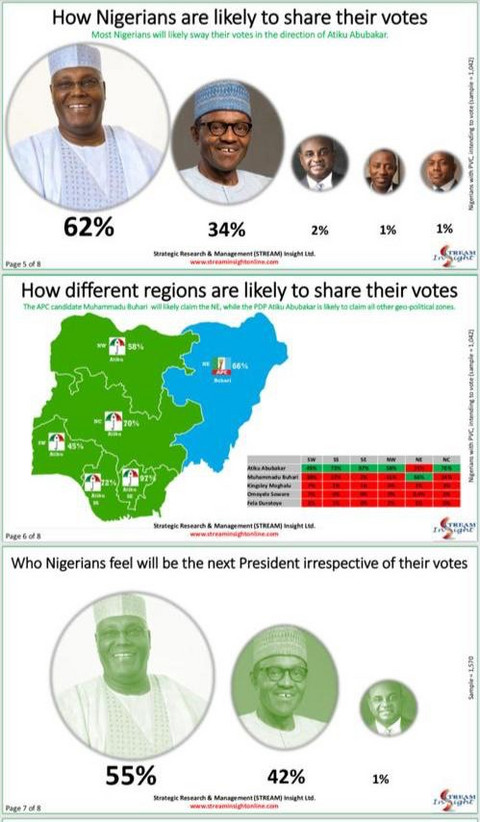 The Economist Intelligence Unit, EIU, research has favoured the presidential candidate of the All Progressive Congress, APC, Alhaji Atiku Abubakar over the incumbent president Mohammadu Buhari in the 2019 Election.

You will recall that in October 2018, The Economist Intelligence Unit (EIU), the research unit of The Economist Magazine, predicted that the opposition Peoples Democratic Party (PDP) will defeat the ruling All Progressives Congress (APC) candidate.

According to the experts, many signs are pointing to an impending victory for the PDP Presidential Candidate Atiku Abubakar and his running mate Peter Obi; from focus group studies carried out by mainstream media and international research organisations to social media and online polls; the feedback has positive towards the ability of Atiku and Obi to deliver growth, provide jobs and began the urgent task of lifting a large number of Nigerians out of poverty.

In October 2018, The Economist Intelligence Unit (EIU), the research unit of The Economist Magazine, predicted that the opposition Peoples Democratic Party (PDP) will defeat the ruling All Progressives Congress (APC) candidate in the upcoming 2019 presidential election. According to the magazine “The 2019 elections will be a close contest between the ruling APC and the PDP. We expect the PDP presidential candidate to win” “The next government is likely to be led by the PDP, the main opposition, potentially in a coalition with smaller parties”.

Supporting this premise, Williams and Associates, the United States-based polling firm which predicted victory for Muhammadu Buhari in 2015 also predicted victory for Atiku Abubakar in the forthcoming presidential polls. The polling firm had arrived at its conclusion working with data collected across Nigeria by its operatives through face to face interviews and using multi-stage stratification proportionate to the population sample responders who were interviewed on their preferences in English and local dialects as appropriate.

These analyses and predictions have been received with a growing sense of optimism by Nigerians both home and abroad, swelling the support base of the former Vice-President who as the the head of the economy under the Obasanjo administration had been responsible for far-reaching economic reforms that lifted over 13 million Nigerians out of poverty and led to the opening up of other sectors of Nigeria’s economy; especially banking and telecommunications.

As Nigerians go to the polls tomorrow, their sense of resolve to cast their votes for Atiku Abubakar and Peter Obi of the PDP come with a sense of duty; that with their votes, they would be doing their part to lift Nigeria out of the doldrums and set it on a path where it once again becomes an enviable member of the comity of nations. By Sunday, when all polls would have been casted, counted and announced by the Independent National Electoral Commission (INEC) Nigerians are certain that they would have cause to dance and smile once more, as a new government that is equipped to bring Nigeria out of darkness would have been elected.

Driving by a petrol station in the country’s economic capital, Lagos, this writer passed a commercial motorcycle (Okada) rider wearing a T-shirt with the inscription “Atiku Means Jobs”; for him and many Nigerian youths who have been without gainful employment, the promise of an Atiku presidency was an emotional and pragmatic one. And who would not agree with them?