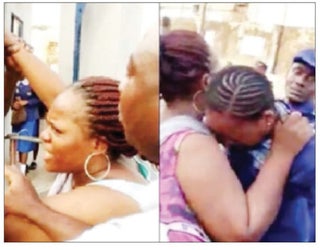 The Chairman of the Parent-Teacher Association of the Queen’s College, Abass Ahmed, has condemned the action of a parent to one of the pupils, who allegedly assaulted security guards for not allowing her daughter into the school.

Ahmed, while condemning the action of the pupil’s mother, noted that there were laid down rules and regulations guiding pupils, adding that the association would probe the alleged assault on both parties.

PUNCH Metro gathered that the pupil, who was dropped off in the school by her mother, was denied entry by the security guards for fixing artificial eyelashes and painting her nails.

In a video that went viral on Tuesday, the yet-to-be-identified mother was seen holding on to the shirt of one of a security guard of the school, alleging that she was assaulted by the officer.

However, various reactions have trailed the video since it went viral.

A Twitter user with the username, @Deji_OoniAbj, said, “Before Twitter came, that Queen’s College girl would not just be sent home, she would be beaten very well and her eyelashes and whatever would be removed in the school there. Her parents would be invited and blamed and they would apologise. But then, discipline is now wrong.”

Condemning the action of the mother, another Twitter user, @d_problemsolver, wrote, “It is shameful (that) a mother would fight the security guards after the school authorities of Queen’s College sent her daughter home for fixing eyelashes. Some parents are responsible for their children’s bad behaviour.”

However, some Nigerians did not see anything wrong with the action of the mother.

A Twitter user, @ebelee_, said, “Why would you be dragging and recording my child on the streets in the name of discipline like she is a thief and not think I will fight for her? Are you not just looking for people to unleash your frustration and faux morality on? Queen’s College would have been sued if that was my child.”

Another user, @DemolaDrogba, said,“Hell will break loose if that was my daughter at Queen’s College today. When we were in secondary school, we did things. Our teachers corrected us by telling us to remove things that were not allowed. We were not denied access into the school and we were not recorded for social media.”

Mother of Six Dumps Baby in a Pity, Claims Husband Ran away

Why MTN Operations May Cease Across Nigeria On 25 August