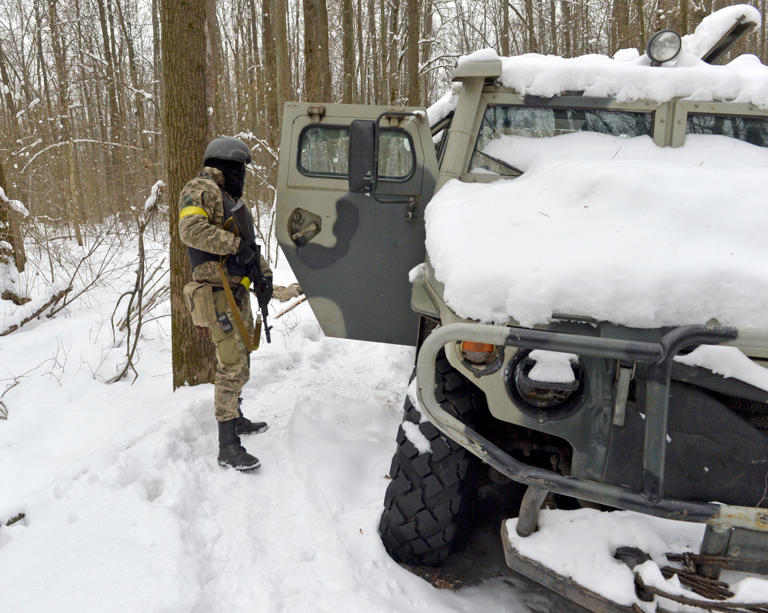 A severe cold snap could push Russian troops to desert a convoy that has been stalled outside of Kyiv for the last few days, a military advisor to Ukraine’s armed forces has said.

Arctic air moving through Russia and Ukraine will combine with an easterly wind to make the temperature feel as cold as minus 20 by Wednesday, according to forecasts.

Russian troops are expected to find these conditions tough as they remain stuck in a column around 20 miles outside of the Ukrainian capital that has barely moved since last week.

“A metal tank is just a fridge at night if you are not running the engine,” said Glen Grant, a senior defence expert at the Baltic Security Foundation who advised Ukraine on its military reform.”

“The cold weather is going to demoralize troops even further and will create even more refrigerators,” he told Newsweek.

Grant said that the weather will add to the logistical problems Russian troops already face and he expects many to simply quit their vehicles.

“The boys won’t wait. They will get out, start walking to the forest, and give themselves up,” he said.

“You just can’t sit around and wait because if you are in the vehicle you are waiting to be killed. They are not stupid.”

The presence of Russia’s 40-mile-long convoy, with an estimated 15,000 troops, first sparked alarm that an advance on the Ukrainian capital was imminent and speculation that it could encircle Kyiv to allow a siege on the city.

But the British ministry of defence said the convoy had stalled because of mechanical problems as well as “staunch Ukrainian resistance.”

Now, having barely moved in days, there is a lack of fresh information over the threat the convoy poses and whether it is simply waiting for logistical supplies before an assault on Kyiv.

But Grant said that the mistakes made in fuel supplies for the convoy cannot be rectified.

“The whole thing about the battle group concept is that the supplies should be integral to the battle group. In other words, if you take a wheeled battle group, and it’s got its own fuel then it can go a long long way before resupply.

“But these guys, it looks as though they crossed the border without integral fuel to the battle group,” said Grant, who added that all the fuel lorries were collected together at the back of the convoy.

“They are backed up against each other so there is nowhere to go. They can’t get off the roads, they are stacked back,” he said.

“If you have got all your lorries behind and the road is blocked, that’s it, there is no way you are bringing them forward.

“It has been relatively cold there anyway, so they have been running the vehicles to keep themselves warm,” he said. Plunging temperatures and a poor supply line will further drain fuel and Russian troops will be targets for highly motivated Ukrainian troops and territorials.

The cold front in which temperatures will fall to their coldest between Thursday and Saturday, according to AccuWeather, may put the Russian convoy at a disadvantage, but will also add to hardships for refugees fleeing the conflict.

Also, Moscow-led attacks have left more than 900 communities in Ukraine without electricity, water or hearing, Reuters reported. Ukraine’s energy ministry said 646,000 people had no power and that 130,000 were without gas.

Russia’s advance in the war declared by President Vladimir Putin on February 24 appears to be slow but forces have captured Kherson in the south and are pushing further west, with a focus on Mariupol.

However, Ukraine said Monday it had retaken the city of Chuhuiv from Russian troops.