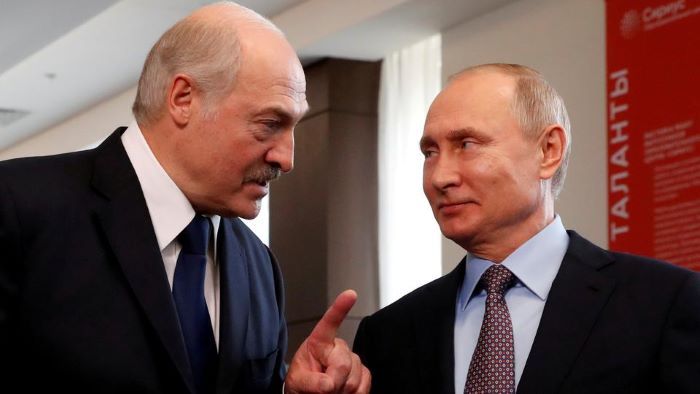 The Putin-backed president of Belarus has warned that World War III could be about to begin as he reportedly prepares his troops to assist with Russia’s mass-scale invasion of Ukraine.

President Alexander Lukashenko warned that the crisis in Ukraine could spark a global conflict, writing in a statement: “Russia is being pushed towards a third world war. We should be very reserved and steer clear of it. Because nuclear war is the end of everything.”

Despite the dire warning, the increasingly rogue leader—who allowed Russia to amass its military hardware and launch an attack from his side of the border—is expected to send troops into Ukraine, according to The Washington Post, citing an unnamed Biden administration official who said, “It’s very clear Minsk is now an extension of the Kremlin.”

The threat of Belarus joining the invasion cast a shadow over Monday’s peace talks which began on the Belarus border town of Gobel shortly before 1 p.m. local time.

Belarus shows off its war games with Russia, and the president makes an appearance

The talks, which were not attended by Ukraine president Volodymyr Zelensky or Russian president Vladimir Putin, were assisted by Russian-Israeli billionaire Roman Abramovich, who owns Chelsea Football Club. Abromavoich attended at the request of Ukraine, according to the Jerusalem Post, which cites his close ties to the Jewish communities in Russia and Ukraine, of which Zelensky is part.

Lukashenko had called Zelensky on Sunday and offered to guarantee his safety if he should attend the peace summit on the Ukraine border with Belarus, saying he would take “responsibility for ensuring that all planes, helicopters and missiles stationed on the Belarusian territory will remain on the ground during the Ukrainian delegation’s travel, meeting and return.”

Zelensky declined the offer, choosing instead to continue fighting off Russian troops in the capital city of Kyiv.