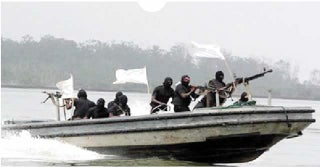 Seven crew aboard a supply ship for the oil industry in Equatorial Guinea were kidnapped when “pirates” attacked their vessel, the oil and gas ministry said in a statement on Friday.

The US oil giant ExxonMobil reported the supply ship Warden, which it was chartering from the oil services firm Swire, was attacked on Wednesday in the country’s territorial waters, it said.

The 15-member crew comprised nationals from South Africa, the Philippines, Serbia and Cameroon.

“Eight hid and seven were kidnapped,” the statement said.

The vessel had left the oilfield of Zafiro, 12 nautical miles off the coast, and was heading to Luba, a port town on the southern island of Bioko, when it was attacked.

The statement gave no details about the kidnappers or their motives.

Equatorial Guinea is located on the southern rim of the Gulf of Guinea, one of the world’s hotspots for maritime piracy.

In the first nine months of this year, the region accounted for 82 per cent of crew kidnappings around the world, according to the International Maritime Bureau, an organisation monitoring crimes at sea.

In 2018, attacks doubled over the previous year.

Pirates in the Gulf of Guinea sometimes divert ships for several days, long enough to plunder the cargo and demand huge ransoms before freeing the crew.

On November 4, four sailors were kidnapped and a guard was shot and wounded when suspected pirates stormed an oil tanker off the coast of Togo.