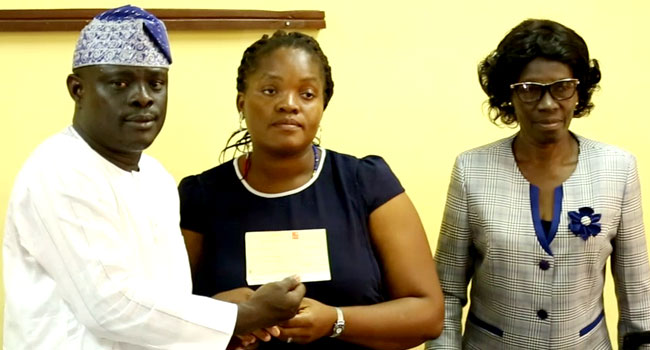 The Independent National Electoral Commission (INEC) has compensated the family of a corps member who died, Abimbola Adeniran, in an auto crash during the general elections in Oyo State.

The Resident Electoral Commissioner in the state, Mr Mutiu Agboke, presented a cheque to the family of the lady on Friday at his office in Ibadan, the Oyo State capital.

He condoled with Abimbola’s family and encouraged them to see their daughter as a heroine who paid the ultimate price for a better nation.

According to him, INEC will do all within its power to nurture the relationship it has with the National Youth Service Corps (NYSC) and other ad-hoc staff community.

Agboke added that INEC recognises the critical mass represented by the ad-hoc staff during the electoral process and would continue to do all necessary to keep them safe.

He, therefore, called on the entire ad-hoc staff community not to be deterred by Abimbola’s death but to renew their determination for service to Nigeria and mankind.

The REC also asked politicians to stop the ‘do or die’ attitude during elections and allow the electorate to freely choose their leaders without violence, intimidation or harassment.

Missus Folasade Adeyemi, who received the cheque on behalf of Abimbola’s family, thanked the electoral body for commiserating with them and remembering their daughter.