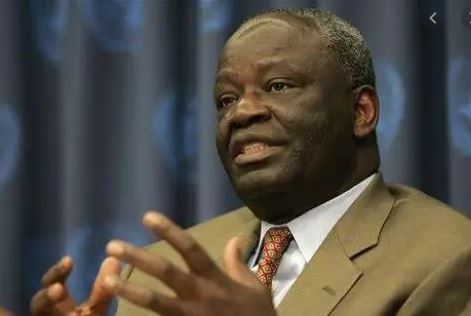 After 25 days President Buhari lost one of his most trusted Chief of Staff, Abba Kyari to death, he has Tuesday appointed Professor Ibrahim Gambari as the new Chief of Staff.

Professor Ibrahim Gambari was the least person many Nigerians ever thought as a replacement for Abbah Kyari, as he is neither a politician nor live in the corridors of power.

However, there are many things you need to know about him and his intimidation credentials.

Professor Ibrahim Gambari is a retired diplomat of 75 years old.

He attended King’s College, Lagos for his secondary education and subsequently attended the London School of Economics where he obtained his Bachelor’s degree in Economics with specialisation in International Relations.

Afterwards, he taught at Ahmadu Bello University, in Zaria, Kaduna State, the second-largest university in Africa.

Also, between 1986 and 1989, he was a visiting Professor at three universities in Washington, D.C.: Johns Hopkins School of Advanced International Studies, Georgetown University and Howard University.

Mr Gambari was a research fellow at the Brookings Institution also in Washington D.C. and a Resident Scholar at the Bellagio Study and Conference Center, the Rockefeller Foundation-run centre in Italy.

Away from his strides in the academics, Mr Gambari was a renowned diplomat who has represented Nigeria in several international interfaces.

He served as the Minister for External Affairs between 1984 and 1985 when Mr Buhari was the military Head of state.

He was the Chairman of the UN Special Committee Against Apartheid between 1990 and 1994, during which he worked closely with African governments to coordinate UN policy to eradicate apartheid, thereby building trust and confidence with governments and policymakers in member countries of the Southern African Development Community (SADC).

He was also one of the five members of the Independent Eminent Experts on the Implementation of the Durban Declaration and Programme of Action and your responsibilities at the world body between 1990 and 2012.

Mr Gambari was appointed by the Secretary-General of United Nations, Ban Ki-moon, and the chairperson of the African Union Commission as Joint African Union-United Nations Special Representative for Darfur effective in January 2010.

Mr Gambari was awarded a Doctor of Humane Letters (honoris causa) from the University of Bridgeport, Connecticut (2002) and Farleigh Dickinson University, New Jersey (2006).

In 2012, Mr Gambari received South Africa’s highest national honour conferred on non-citizens, the Order of the Companions of O. R. Tambo, which was conferred to him personally by President Jacob Zuma on October 26, 2012.

He was also appointed as the first Chancellor, Kwara State University in March 2013