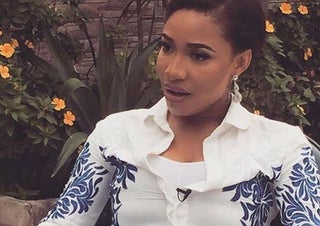 Some days ago, the news that Nollywood actress Tonto Dikeh was arrested by Dubai security agents after she allegedly spoke rudely to a security officer littered the internet. She was also alleged to have been deported to Nigeria.

But Tonto Dikeh isn’t in Nigeria yet.

The light skinned divorced mother of one is still being held in Dubai Detention cell for further investigation.

Though nothing has been officially heard from Tonto on social media except for some few postings from her best friend, the famous cross dresser Idris Okuneye aka Bobrisky, its obvious the friends (Tonto and Bobrisky) are trying very hard to cover up their tracks.

Tonto was arrested over the weekend when she attended an event in Dubai. She was denied entry by security personnel and she called them untoward names.

She was said to have spent the night in prison.

Tonto, who was in Dubai to attend the One Africa Music Fest and Ex Big Brother Naija housemates BamBam and TeddyA’s wedding, could no longer attend these events since she was in detention.

According to Blogger Kemi Ashefon, she has been in detention since Friday!

“Yes, she hasn’t been released but still in detention,” a source close to the Nollywood actress told Kemi Ashefon.

But Tonto released a video debunking any news of detention or deportation through Bobrisky.