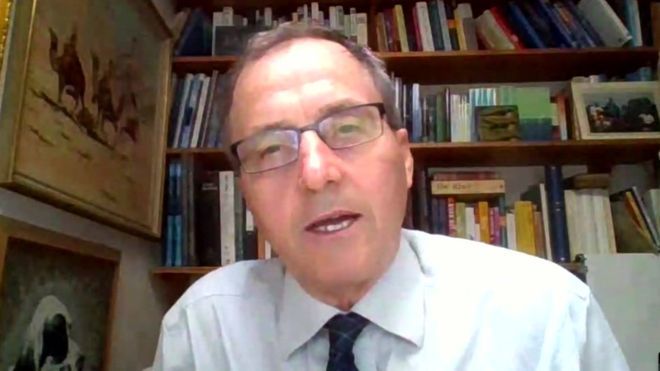 Running factors through an algorithm based on the timing of the UK’s outbreak, Dr John Dagpunar from the University of Southampton suggested that the March 23 lockdown could have resulted in a total of around 39,000 deaths.

In his findings, he said if lockdown had started a week earlier, on March 16, the model suggested, there could have been a ‘very large reduction’ in deaths, limiting them to around 11,200.

The virus would have infected four per cent less of the population in this scenario (two per cent compared to six per cent), the study said, and the demand for hospital beds would have been lower.

Dr Dagpunar said: ‘In hindsight [this] clearly illustrates that earlier action was needed and would have saved many lives.’

‘Literally, each day’s delay in starting suppression (lockdown) can result in thousands of extra deaths.

‘The same is true for premature relaxation, acknowledging that the rate of decline is less than the rate of growth, so the effect although severe is not quite as strong.

‘These conclusions are the incontrovertible consequence of the exponential growth and decline of a managed epidemic.’

Dr Dagpunar’s paper was published on the website medRxiv without being checked by other scientists or journal editors.

Polls of Brits show around two-thirds of people think the government took too long to put the UK in lockdown.

But other experts say ministers ‘lost sight’ of the evidence and rushed into lockdown, praising Sweden for holding its nerve and not shutting down the economy.

Surveillance studies have shown the crucial R rate had already begun to drop before the draconian measures were introduced.

And other data suggested transmission had peaked after the softer social distancing measures to curb the outbreak were rolled out on March 16.

Stay at home as much as possible to stop coronavirus spreading – here is the latest government guidance.

If you think you have the virus, don’t go to the GP or hospital, stay indoors and get advice online.

Only call NHS 111 if you cannot cope with your symptoms at home; your condition gets worse, or your symptoms do not get better after seven days.

In parts of Wales where 111 isn’t available, call NHS Direct on 0845 46 47. In Scotland, anyone with symptoms is advised to self-isolate for seven days.  In Northern Ireland, call your GP.

‘The Seven-Fold Yoke & Cabal That Own Nigeria’