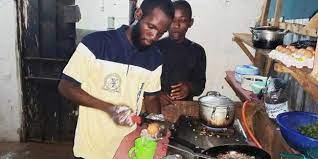 Usman Abubakar-Rimi, a final-year student at Usmanu Danfodiyo University Sokoto (UDUS) studying medicine and surgery who started a food delivery service because of the protracted ASUU strike, has passed away.
In Sokoto’s Diplomat neighborhood, Abubakar-Rimi opened an Indomie joint and a culinary establishment.
According to the News Agency of Nigeria (NAN), the medical student passed away following a brief illness.
The Chairman of the 21st Century Entrepreneur Hub, Umar Idris, a close friend of the deceased, confirmed the death to NAN on Saturday.
Idris claimed that the deceased’s burial had followed Islamic customs. He described him as a modest individual who was a committed student and businessman. IPPIS Exposes Man Who Was Caught Defrauding The Government