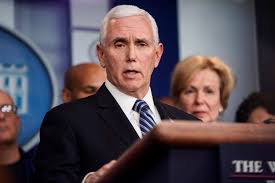 One of Vice President Mike Pence’s office staff has been tested positive for the coronavirus.

However, the victim had not come into close contact with Mr Pence or President Trump, according to a spokeswoman.

Mr Pence’s spokeswoman, Katie Miller, did not immediately reply to a request for more details about the official’s role, or when the person’s last day at work was.

Several Trump administration officials have self-quarantined over concerns of exposure to the virus.

This week, Mick Mulvaney, the outgoing acting White House chief of staff, entered self-quarantine in his home state of South Carolina after his niece, with whom he shares an apartment in Washington, fell ill and was awaiting test results.

Stephanie Grisham, the White House press secretary, said this week she was working from home after coming into contact with a member of the Brazil delegation that also tested positive.

Last week, Ivanka Trump, the president’s eldest daughter and adviser, had stayed home “out of an abundance of caution” after an Australian official she recently met with tested positive for the coronavirus, a White House spokesman said.

By Friday, Ms Trump had returned to work, watching from the sideline as her father sparred with reporters in the briefing room.

A person familiar with the situation said she had tested negative for the virus.

NCC Shut Down All Telecommunications Provider In Zamfara For 2 Weeks