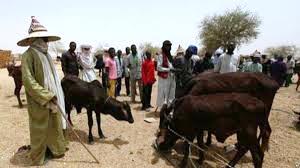 Governors from the South-West, South-South, South-East and the Middle Belt have vowed they will not donate lands in their regions for herdsmen settlements despite the latest threat by herdsmen under the aegis of Miyetti Allah Kautal Hore.

The National President of the herdsmen group, Alhaji Abdullahi Bodejo, in a statement last weekend said governors who wanted peace in their states must establish herdsmen settlements.

“You are a governor and you want to enjoy peace in your state, you don’t need any long meeting, just create a particular area for the Fulani and equip them with modern facilities,” Bodejo said.

However, former President Olusegun Obasanjo in a swift reaction on Monday said it was a mistake on the part of Miyetti Allah Kautal Hore to tie the existence of peace in the states of the federation to the establishment of settlements for herdsmen.

But governors from the four geopolitical zones of the country who spoke with Sunday PUNCH lambasted the herdsmen group and said no amount of threat would force them to donate lands for settlements in their regions.

The governors who spoke through statements by their media aides said neither Ruga nor any other forms of herdsmen settlement would be allowed in their domains despite the threat.

In the Middle Belt, Governor Samuel Ortom of Benue State and Darius Ishaku of Taraba State said Miyetti Allah was only trying in vain, saying nothing would make the region give land for herdsmen settlements.

Reacting to the threat by Miyetti Allah last week that “no Ruga, no peace,” the Senior Special Assistant to Ishaku on Media and Publicity, Mr Bala Dan-Abu, said Miyetti Allah’s threat was unacceptable.

According to him, the Taraba State government’s stand against Ruga remains unchanged.

He said, “Our stand against Ruga settlement remains unchanged. We have a law in place prohibiting open grazing and establishment of ranches.

“This is the best practice in the world today. We are going to cooperate with all groups in the state in our quest for peace, so we call on Miyetti Allah to stop issuing threats. It is not acceptable for us in Taraba.”

Ortom, in his reaction, dared Bodejo to bring his herds of cattle to Benue and wait to see the consequences of flouting the state’s anti-open grazing law.

The governor said no part of Benue would be ceded to Ruga or cattle colony.

He said, “Recently, I heard someone who calls himself the chairman of Kautal Hore saying the governor would not know peace except they get cattle colony or Ruga.

“We have no query over his outburst if other states decide to cede their land to Ruga or cattle colony; we are in a democratic society.

“But let it be known to him that he is not part of Benue State, he cannot decide for us what we want in the state. We are in a federation but the federating units have the right to make laws for their states and Benue State has made law and anybody who trespasses will be decisively dealt with.

“Let him (Bodejo) come here (Benue) himself and bring his cattle; he will see what will happen to him. I will personally arrest him and the law will take its course.”

Nothing will change our mind on Ruga — S’South govs

Delta, Cross River and Rivers states said no amount of threats by Miyetti Allah would make them change their positions on Ruga.

He said, “There is no way external interference can influence the policies of the state government. We do not have plans for Ruga here.

“We are governed by the interests of the people of the state. Our policies in Cross River are never influenced by external influence or pressure.”

Governor Ifeanyi Okowa of Delta State, who spoke through his Commissioner for Information, Mr Charles Aniagwu, also said the state did not have land for Ruga settlement.

He said, “We have made our position known on Ruga and we stand by it. We do not have land for it or cattle colony and you are aware that part of our land is covered by water, so where are we going to get the land? You cannot give what you do not have.”

In Rivers State, a top official in one of the ministries, said the state had not changed its stance on Ruga.

The state government in a statement signed by the Permanent Secretary, Ministry of Information, Paulinus Nsirim, in July said Rivers had no land for the implementation of such a policy.

It noted that the state governor, Nyesom Wike, had prioritised commercial agriculture, hence all available arable land in the state would be needed to achieve food production and employment for Rivers youth.

The top official said, “We have made our stand known on this matter. If there is a change of position on Ruga, you will know. The Rivers State Government has not changed its position.”

In the South-West, governors of Ekiti and Ondo states said they would not rescind their decisions on not having Ruga.

The state Commissioner for Information, Muyiwa Olumilua, said “In Ekiti State, Governor Kayode Fayemi has said categorically that he is not embracing Ruga.

“Whatever Miyetti Allah said cannot change what the governor has said. He has said we are not accepting Ruga, we are not giving out land for Ruga.

The Ondo State Commissioner for Information, Mr Donald Ojogo, also said the state did not have any land to donate for Ruga.

“First, the position of the state in respect of Ruga remains. The state is not donating land for Ruga. More importantly, Ruga as an idea has long been jettisoned by the Federal Government,” he said.

In the South-East, the Enugu State Commissioner for Information, Mr Chidi Aroh, said the state government was still standing on the resolution of the South-East governors that there was no land for Ruga in the zone.

The South-East Governors’ Forum had in a resolution issued at the end of its meeting in Enugu declared that the zone had no land to donate for Ruga or for the National Livestock Transformation Plan.

It went further to ban the movement of cattle by foot in the region, describing it as the point of conflict of herders with the farmers and natives.

The Chairman of the forum and Ebonyi State Governor, Chief David Umahi, who read the position of the governors to journalists, said, “The fact remains that no South-East governor has donated any land or intends to donate any land for any of the two programmes for lack of enough land in the entire South-East.”

Speaking to Sunday PUNCH, Aroh said Miyetti Allah had not issued any threats to Enugu State and others in the zone.

Ohanaeze described Miyetti Allah as a terrorist organisation and urged the Federal Government to deal with the body for peace to reign in the country.

The President General of Ohanaeze Ndigbo, Chief Nnia Nwodo, who spoke to one of our correspondents, said, “Miyetti Allah is used to inciting, and unlawful comments but they have not been arrested. They are not questioned.

“They fight farmers, kidnap them, destroy their farms, take over their farms and occupy them. Nobody cares. They import foreigners into Nigeria, secure registration for them in our national identity scheme. Nobody cares about it.

But the spokesperson for the Indigenous People of Biafra, Emma Powerful, in a statement said the group was ready for the herdsmen.