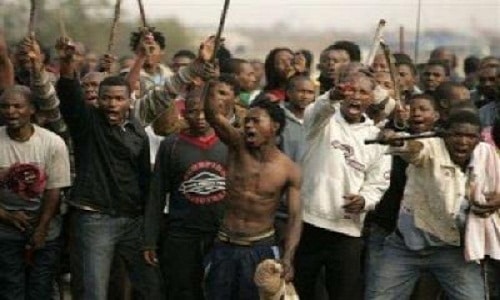 Sounds of deafening sporadic gunshots boomed in the area on Saturday evening, causing panic among the residents of Gege, Ita-Sakun, Ita-Maya and Oke-Ado areas of Ibadan.

Security was reportedly beefed up in the areas on Saturday evening following the bloody clash between two rival groups in the area.

It was gathered that fight broke out in the area as two factional groups, whose identities were not yet known, were lurked in supremacy battle against each other.

Although, the actual cause of the clash could not be ascertained as of the time of filing this report, it was gathered that shop owners and residents of the area were scampering for safety in the early hours of Saturday following sporadic gunshots between the warring groups.

An eyewitness said one person was badly injured during the fight that lasted more than one hour.

He, however, said that the condition of the injured person could not be determined as he was immediately rushed to an undisclosed hospital.

He said men of the command had been deployed to the scene to avert total breakdown of law and order.

Fadeyi stressed, “There was a clash. The police had been in the area since the incident happened in order to calm the situation. Our men are still on the ground to make sure that there is no breakdown of law and order.”