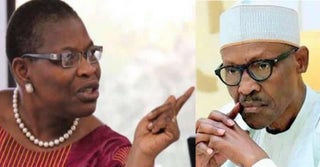 Education, Oby Ezekwesili, has called on President Muhammadu Buhari and the Department of State Services to release rights activist, Omoyele Sowore, after he fulfilled his bail condition as demanded by a Federal High Court in Abuja on Tuesday.
Sowore has been detained arbitrarily by the Nigerian Government since August 3, 2019 for planning a series of protests against poor governance in Nigeria.
In a post on Twitter on Wednesday, Ezekwesili said, “We eagerly wait for the DSS to speedily comply with Justice Taiwo’s ruling, seeing that the lawyers of @YeleSowore have themselves duly fulfilled the set bail condition.
“The DSS is directly supervised by the Presidency @NGRPresident and so @MBuhari, the world is watching you.”

Ezekwesili in her reaction, said the President’s show of power is alien to the constitution of Nigeria. She accused President Buhari of directly supervising the violation of the constitutional right of Sowore.

BankyW on his part, asked President Buhari to surprise everyone by doing the right thing. See their tweets below

Jang Did Not Follow the Due Process of Obtaining N2.079 Billion Loan- Witness