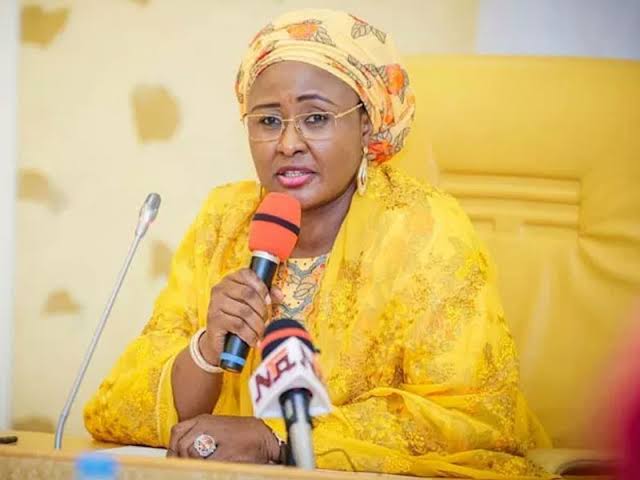 The First Lady, Aisha Buhari has said that ‘bad people’ have taken over the country from her husband President Muhammadu Buhari.

Aisha reportedly made this known in a phone-in interview on Television Continental (TVC)’s ‘Journalists Hangout’ programme on Thursday, positing that it is unacceptable that those in the realm of affair have chosen to keep mute in the face of tyranny when some are trying to use the social media to bring down the government.

“I think that we should not allow people that are nothing to override the innocent, I don’t know why people that are supposed to be in charge should remain mute while bad people take over the country from us. It is impossible and totally unacceptable. They are now taking to social media to bring down the government itself,” Aisha said.

She revealed that false information did bother her, noting that the spread of fake news of Buhari’s rumoured death and his supposed decision to take another wife was a ploy to destabilised her husband’s government.

Recall that Aisha had two years ago told Voice of America in an interview that two powerful people hijacked the country’s government from her husband who is the elected president.

She said her husband would have achieved a lot more than it had in three years if not “for two people in government who will never allow things to move fast.”

“I am disappointed in men who rather than fight these two men will go to them in the night begging for a favour,” she had said.

The First Lady whose last comments rebuked state governors for not performing to expectations also accused presidential aides and other government officials of ignoring issues they should respond to and focusing on things that the president has no business in.

“But when it comes to unnecessary things, people will start talking of the presidency. A typical example is what happened after the election in Bayelsa State. When the PDP came out and said they would… suspend His Excellency, Goodluck Jonathan, the former president, for doing wrong or something like that.

“I have seen no reason (the) presidency should come out and say that they were shocked to hear that. Is it their business? Are they PDP members? Is (former) President Jonathan a member of our party? What does that have to do with the presidency?

Sowore Rearrest Is Aggression Of Executive Against Judiciary – Oby Ezekwesili

Ighodalo Words After Demise Of His Wife