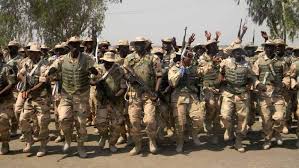 24 suspected kidnappers have been arrested by the Nigerian Army in Ondo State within their two weeks of operation around Owo and Akoko areas of Ondo State.

Several persons including an Army Captain and Naval Officer have been kidnapped along that route.

Chief of Army Staff (COAS), Lieutenant General, Tukur Buratai, disclosed this when he visited the Olowo of Owo, Oba Ajibade Gbadegesin Ogunoye III in his palace.

Represented by the Commander, 32, Artillery Brigade, Owena Cantonment, General Zakan Abubakar, Burutai said the Army would not relent in carrying out its constitutional roles of protecting lives and property of the people in the state.

He said troops were deployed to some strategic area in the state; precisely Arimogija, Owo to Oba Akoko axis which led to the arrest of the 24 suspects.

READ ALSO: ‘The Seven-Fold Yoke & Cabal That Own Nigeria’

A letter from the COAS was presented to Oba Ogunoye III and commended the monarch for being a lead advocate in projecting the Nigerian Army in good light, as well ad providing credible information to tackle crime in Owo community.

The Owo monarch assured that the community would synergise and support the Army in the fight against terrorism, kidnapping, armed robbery/banditry and other contemporary security challenges in the country.