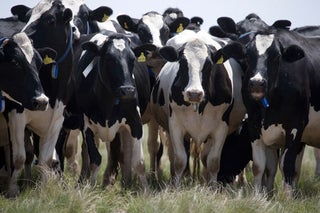 Three cows swept into the ocean when Hurricane Dorian struck the US east coast in September were found living on a string of sandy islands miles away from their home, US media reports.

The bovine trio is believed to have swum four to five miles (six to 10 kilometres) before placing hoof on land — in this case an island of sand dunes and scattered vegetation that is part of North Carolina’s Outer Banks, the Charlotte Observer newspaper reported.

The animals were recently discovered by park rangers at the Cape Lookout National Seashore, a long chain of undeveloped barrier islands off the North Carolina coast.

Three months had gone by since the animals, belonging to a free-range herd living on private land on Cedar Island, went missing during the storm.

Category One Hurricane Dorian created a “mini-tsunami” that swept cattle and some 30 wild horses from Cedar Island into the ocean when it struck on September 6.

The cows were identified by their keeper, Woody Hancock. They will likely be sedated and sent home on a boat, a Park spokeswoman told the Observer.

Atiku Mourns as His Aid Dies