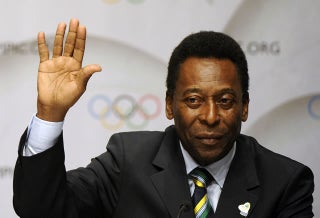 The revered Brazil striker Pele scored his 1,000th goal on November 19, 1969 at Rio de Janeiro’s Maracana stadium in a match between his beloved Santos and local outfit Vasco de Gama, whose vast ranks of fans gave the iconic No. 10 a standing ovation.

That goal half a century ago was a beautifully converted penalty which escaped the grasp of the Vasco goalkeeper, sparking a pitch invasion by the press and culminating in Pele being paraded shoulder-high around the historic stadium by his teammates.

Swarms of photographers and journalists had been poised pitchside for the moment.

The penalty decision was a doubtful one. Pele recently joked that with today’s VAR system it would likely have been refused.

The goal has etched itself into the Brazilian national consciousness, a deft finish into the bottom right corner, with Pele running to collect the ball and kissing it as he turned away.

Some 65,157 fans had bought tickets for the Brazilian league match in which Pele scored the landmark goal and which Santos went on to win 2-1. Folklore says there were 80,000 in the stands.

Even if today there is debate over the exact number of his goals that should count in an official tally, there is no debate over Pele’s sublime goal-scoring talent and the place the now 79-year-old holds in the public imagination.