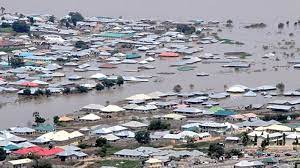 According to reports, many residences in Lokoja, the capital of Kogi State, have been overrun by reptiles, especially snakes, which has alarmed locals who are starting to return home as the water slowly subsides.
According to a story published on Sunday, inhabitants of the flooded neighborhoods of Gadumo, Ganaja, Adankolo, part of the Army Barracks area, and Lokoja’s Marine sector’s Ajara Quarters have been battling an infestation of snakes in their homes.
Abdulmaliki Usman, a resident of Ajara Quarters, told our correspondent that he returned to his home as a result of the floodwaters receding, but there is seldom a day when they do not kill two to three snakes in their complex.
“On Monday, as the floodwaters in our region began to gradually recede, we came home. Up to 10 snakes have been killed since then, some in the courtyard and some inside of the rooms. We currently live in fear. But we thank God that no snake bite incidents have been reported,” he stated.
In addition, on Thursday, travelers on the Ganaja-Lokoja route reported coming across a large snake in their boat not long after setting out to cross to the other side of the town.
A passenger in the boat reported seeing a snake a few meters from the shore, which caused other passengers to jump into the sea.
You can read more of such stories at The Cheer News
Gov. Diri: &#8220;Flood Has Also Overtaken My House.&#8221;
American Gospel Minister, Joyce Meyer, Donates To Nigerian Flood Victims
“We were fortunate that it wasn’t that deep there. According to a passenger named Joseph Benjamin, the boat owner eventually killed the snake with his paddle.
In the same line, it was reported that a family in the Army Barracks neighborhood on Wednesday killed a large snake in their chamber.
It was said that a young child discovered the snake under a chair and immediately alerted her parents, who promptly killed it.
You can read more of such stories at The Cheer News and Credible News